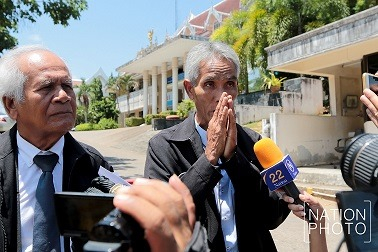 Jaree Butterb, father-in-law of slain village headman Worayuth Sunglung, gives a “wai” outside Krabi Provincial Court on Tuesday as he expresses gratitude for a ruling condemning seven assailants to death for the murder of Worayuth and his family in 2017. Nation Photo/Charoon Thongnual

A seventh defendant in the murder almost exactly two years ago of a family of eight in southern Krabi province was sentenced to death on Tuesday, while the same sentence was upheld for the mastermind behind the crime and for five accomplices.

The court further ordered the seven men sentenced to death to jointly pay Bt5 million in compensation to the victims’ relatives, who were co-plaintiffs in the suit brought against them.

Tawatchai Boonkong, 38, the seventh defendant condemned to death, had been sentenced in the lower court to 13 months in jail. Both he and Chalita, 42, had completed their sentences by the time of the appeal hearing.

The lower court last year heard the facts of the July 10, 2017, murders of Ban Khao Ngam village headman Worayuth Sunglung and seven of his family members at their home in Khao Leuk district.

Surifath was convicted of ordering Worayuth and his family killed over a land-ownership dispute. Worayuth gave title deeds to Surifath as collateral for a loan and eventually repaid the debt, but Surifath refused to return the deeds.