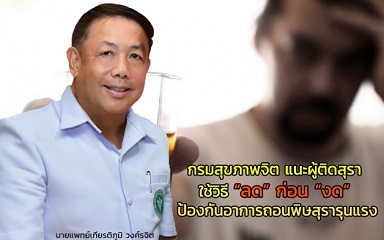 Drinking alcohol in excess can harm your health – but so can an attempt to quit it “cold turkey”, a senior health official warned on Wednesday.

Those wishing to kick the alcohol drinking habit during the upcoming Buddhist Lent should do so by gradually reducing alcohol intake down over days before quitting, so as to prevent severe alcohol withdrawal symptoms including seizures, said Mental Health Department chief Dr Kiattiphum Wongrajit.

He cited 2017 national statistics showing that out of the 55.9 million Thais aged over 15, about 16 million people drank alcohol – 6.98 million of them regularly.

Drinking alcohol was harmful both in the short-term and the long-terms, said Kiattiphum, as it could lead to injuries from alcohol-induced brawling or road accidents, as well as a large number of health issues such as ulcers, liver ailments, coronary heart disease, anxiety and depression. It could also increase the drinker’s risk for suicide or self-inflicted harm.

But trying to quit it cold turkey was also harmful due to the side-effects of alcohol withdrawal, he warned. In non-severe cases, withdrawal symptoms could include anxiety, restlessness, loss of appetite, uncontrollable shaking of hands and heart palpitations, that disappear within 48 hours, Kiattiphum said.

However severe symptoms can develop 12-48 hours after acute alcohol withdrawal, including confusion and uncontrollable shaking of the hands and the body due to the automatic nervous system working in overdrive, he said. Some people also develop delirium, hallucinations, paranoia or seizures three to four days after quitting.

Those addicted to alcohol and who wish to kick the habits for the Buddhist Lent period of July 17 to October 13 should begin now, said the Mental Health Department chief. They should gradually reduce their alcohol intake over days before then quitting in order to avoid severe withdrawal symptoms.

Those wishing to stop drinking immediately must consult their doctor a day prior to quitting, so they could obtain prescription medicine that can minimise withdrawal symptoms, Kiattiphum said.

He urged family members and friends to provide moral support to help them in their effort to kick the habit.

For more information, people can call the department hotline 1323 around the clock, he added.