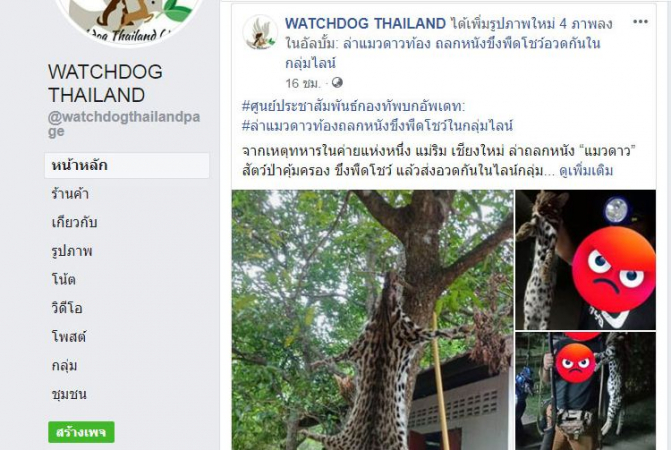 A military investigation has been launched into the alleged poaching and skinning of a leopard by a soldier serving in Chiang Mai province, after the man’s photo with the animal was revealed online.

At a press conference held yesterday by Army Area 3 in Phitsanulok province, a spokesman said that the soldier in question was a non-commissioned officer serving with the 7th Infantry Division.

Colonel Rungkhun Mahapanyawong said that the initial investigation would take seven days for fact-finding into the incident and identifying the soldier. He said the soldier would be disciplined and penalised if found liable under the laws governing poaching and the killing of an endangered species.

The Thai social media have been heavily criticising the soldiers after messages from a secret Line chat room, carrying pictures of himself holding the carcass of a small leopard, was cited by Facebook Watchdog Thailand.

The watchdog reported another incident concerning the killing and skinning of a snake. That case has not drawn much criticism, presumably because the snake is not a protected species.