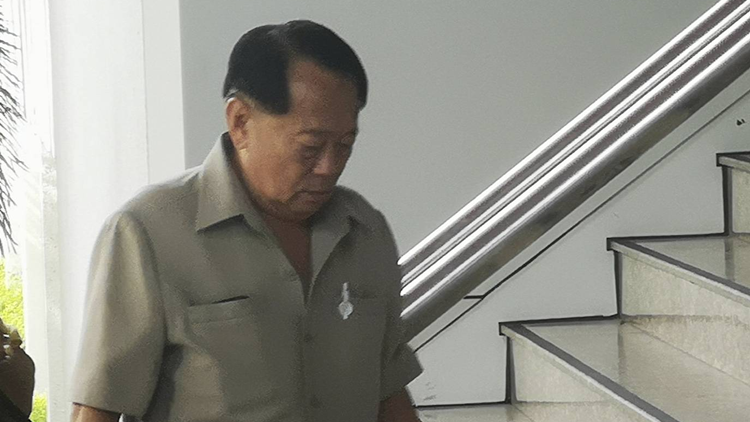 The Supreme Court ruled that Chaovarin’s appeal against the ruling by the Appeals Court was unjustified and ordered that he be sent to jail immediately. It also ordered him to return Bt11.428 million to BPC Trading (Cambodia) Co Ltd.

In his appeal against the ruling by the appeals court, Chaovarin tried to argue that BPC Trading was not an affected party, but the Supreme Court ruled that the money that Chaovarin withdrew came from a firm that is a daughter company of BPC Trading, and so the parent had the right to be a co-plaintiff in the case.

The Supreme Court upheld the appeals court’s conviction of Chaovarin, 72, for violating the Computer Crime Act and Article 341 of the Criminal Code to deceive the Cambodian firm into wiring him US$352,781 (about Bt11.428 million).

Thai public prosecutors and the Cambodian firm jointly filed a criminal lawsuit against Chaovarin with the Criminal Court on February 27, 2015 accusing him of deceiving the firm of the money.

The court was told in the lawsuit that the firm had ordered goods from TPI Polene Plc worth $352,781. The purchase order was sent to TPI via an email and the TPI sent an invoice to the Cambodian firm via an email, informing it to credit TPI’s bank account.

The court was told that Chaovarin and his accomplices, who have yet to be arrested, forged the invoice from May 6 to May 9, 2014 to deceive the Cambodian firm to wire the money to an account of the Thai and Chinese Buddhist Culture Association, which was chaired by Chaovarin.

The Criminal Court sentenced Chaovarin to one year and six months in jail for embezzlement and acquitted him of a fraud charge on the grounds that the fraud has not been fully carried out.

Chaovarin was released on bail while appealing the primary court’s ruling.

On March 24, 2017, the Court of Appeals ruled to change the conviction from embezzlement to fraud, which carried a harsher punishment, on the grounds that Chaovarin had a clear intent to deceive the company. The Appeals Court noted that Chaovarin rushed to transfer the money to several accounts after it was credited to the association’s account.

The Appeals Court initially sentenced Chaovarin to three years in jail but commuted the jail term to two years because his statement had benefitted the trial.

Chaovarin was released on bail while he appealed the Appeals Court ruling.

The Supreme Court ruled that it was in agreement with the Appeals Court ruling and upheld the two-year jail term against Chaovarin.