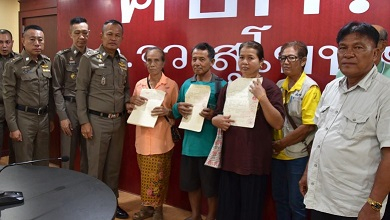 A Sukhothai farmer on Wednesday thanked a national politician and police for intervening with a local politician’s family to return three land plots covering 89 rai that she had placed as collateral for a Bt93,000 loan in 1983.

Suwichan told reporters that Riam had borrowed Bt93,000 in 1983 from the local politician and had been told to sign “a power of attorney for the three plots as loan collateral”, which turned out to be a purchase contract, transferring land ownership to the politician.

Suwichan said a recent police probe found that the case involved alleged fraud, document forgery and over-charging of interest beyond the legal rate. However, as the offences took place over 30 years ago and had crossed the statute of limitations, police could not proceed with legal action against the politician.

The police opted to invite the politician’s family to negotiations resulting in the family, fearing their reputation would be tarnished, agreeing to return the three land plots and let Riam repay them the balance Bt259,039, Suwichan said. “Riam is lucky to get back the land plots whose value is in excess of Bt5 million,” said the senior police officer, urging people to be careful in reading contracts before signing.

Suwichan revealed that there were 14 other people facing a similar predicament as Riam and he would forward these cases to the Anti-Money Laundering Office.

Riam concurred with the senior police officer’s version of her story. She said that after getting the loan, she had been working on the land plots for years and was shocked to hear that the plots were already in the politician’s name. She was advised by a friend to contact a relative of Phalang Pracharat leader Somsak Thepsuthin. Somsak helped coordinate with the police to help her regain her land plots.