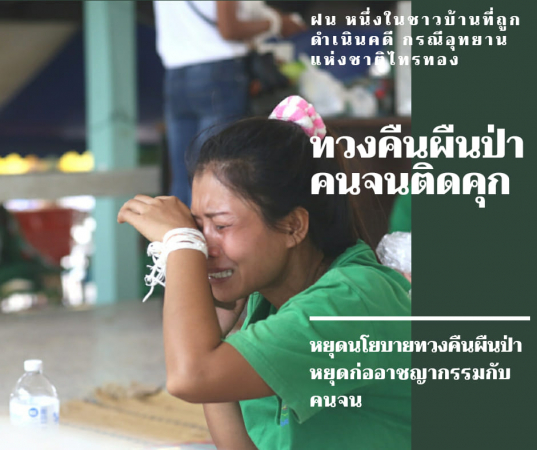 Human rights defenders on Wednesday demanded that the government offer remedial action for victims of the National Council for Peace and Order’s forest reclamation policy, after the problematic conservation policy was revoked by the latest NCPO order.

They also urged the government to change its mindset and reduce chronic land conflicts by allowing the forest communities the right to live on their ancestral land and get involve in natural resource management alongside the authorities.

On Tuesday, the NCPO junta revoked at least 70 orders enacted during its past five years in power. Among them were NCPO orders 64/2557 and 66/2557 on forest reclamation.

Surapong Kongchantuk, a prominent human rights lawyer, said that thousands of people from every corner of the country have been prosecuted, intimidated, and had their human rights violated in the name of forest reclamation operations. It was now time, he said, for the government to reconsider its harmful policy and take responsibility for the problems it had caused.

“Although the government has now withdrawn its infamous forest reclamation policy, there is no clarity on how it will compensate people who have been affected by its implementation,” Surapong said.

“Given it is the duty of government and official agencies to protect their citizens’ wellbeing and rights, authorities need to offer remedial measures to all victims of the forest reclamation policy, and also tackle the issue of their land rights.”

He said that authorities should also change the focus of conservation away from centralised management and control that excluded people from the forest. It was this mindset – rather than the forest conservation policy itself – that was causing the conflicts over land rights, said Surapong.

“The violent operations and harsh prosecutions against forest villagers were happening long before the NCPO forest reclamation policy was enacted. If officials in charge do not change this problematic mindset on natural resources and forest conservation, these poor and marginalised local communities in the forest will continue to be harassed by harmful government policies,” he said.