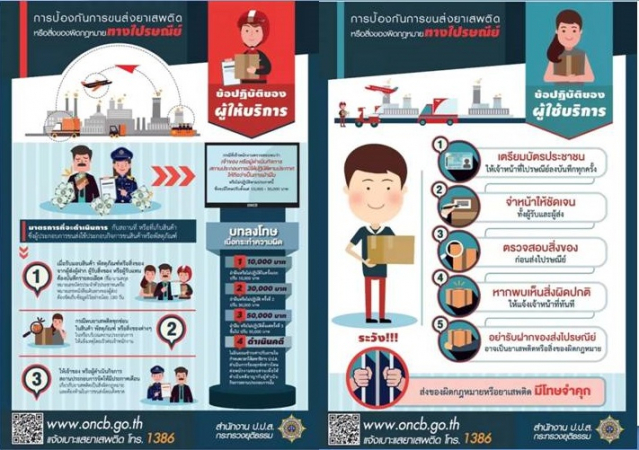 The Justice Ministry has earmarked Bt1 million from its Justice Fund to apply for the bail release of a 22-year-old vocational student in Roi Et who was charged with possessing drugs after a package containing 10.3 grams of crystal meth or “ice” arrived in her letterbox on June 19, Tawatchai Thaikyo, the ministry’s deputy permanent secretary, said.

An application and guarantee for the temporary release of Supranee (last name withheld), who is known for her high grades in school, will be submitted by an official from the Roi Et Justice Office, Tawatchai said.

This move comes after a 17-year-old man arrested in Bangkok on July 5 confessed to being contacted by another 22-year-old woman for the drugs. He said the woman, whom he has known for a year now, gave him Supranee’s address.

The drug-buyer, Thita (last name withheld), who is also Supranee’s friend, wanted to use Supranee’s address to order a “surprise gift for a boyfriend”. Thita was arrested on July 6.

In related news, Office of Narcotics Control Board (ONCB) secretary-general Niyom Termsrisuk on Thursday warned members of the public against falling victim to ill-intentioned people by lending their ID card or agreeing to deliver or receive packages on behalf of others.

He warned that mailing packages containing narcotics is a criminal offence in Thailand, and can land people in prison for life and liable for a fine of Bt1 million and Bt5 million, while receiving drugs is the same as the criminal offence of “having drugs in possession”.

Owners of courier businesses found to have allowed such a violation to take place can be charged with negligence and may have to pay a fine of Bt10,000 to Bt50,000, he added.

Niyom said the ONCB has published information to raise public awareness about the issue, adding that people call the 1386 hotline round the clock if they suspect drug trade or violation of the drugs law by courier businesses.