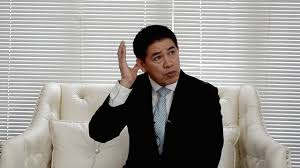 Thammanas Phromphao, the newly appointed deputy agriculture minister, said on Thursday that the drugs related allegation against him was part of a political move aimed at bringing down the government, adding that he was getting ready to take legal action against the accusers.

“I know that they are my political enemies and I am going to take legal action,” he told reporters.

Thammanas, a key figure in the coalition leading Phalang Pracharat Party, has recently been targeted by opposition politicians, who question his qualifications owing to a prison term he served in Australia stemming from a drugs-related offence.

However, Thammanas defended himself by saying he served an eight-month sentence in Australia for failing to report a drug-trafficking deal.

“I did not smuggle, produce or sell drugs and I have no legal cases left in Thai courts,” the politician said.

He added that he is being targeted because he was the key coordinator of recent negotiations to form the new government. “I also know the secrets of many political parties I have worked with,” he said without elaborating.

He also maintained that he has never coveted a seat in the Cabinet, “but I have to work because the prime minister has given me tasks to complete”.

Thammanas added that he considered himself suitable for the job because “I am a child of farmers and grew up with soil”.