Experts from many institutes are putting their heads together to come up with an engineering plan that will help the centuries-old Wat Phra Mahathat Woramahawihan win the approval of the United Nations Educational Scientific and Cultural Organisation (Unesco) and allow the temple to be inscribed a world heritage site.

And in contrast to the age of the temple, they are using the very latest in engineering technology to identify the most effective ways to conserve the edifice, a step required to complete the final conservation plan.

“That conservation plan is a core part of the documents needed to seek world-heritage status for the temple,” says Chatchai Sukrakanchana, chairman of technical committee on nominating Wat Phra Mahathat Woramahawihan as a world-heritage site.

Located in Nakhon Si Thammarat town and constructed in the 13th Century CE at the same time as the town was founded, this ancient temple has been on the tentative list for world heritage status since 2013. Under Unesco rules, Thailand must submit a full report on the outstanding universal value of this temple together with its conservation plan by this year.

“We have now joined forces with a research team and have funding from the Thailand Science Research and Innovation (TSRI) to complete the conservation plan,” adds Chatchai, who also heads Nakhon Si Thammarat’s Council of Cultural Affairs. He believes the use of engineering science will provide a guarantee to Unesco that should Wat Phra Mahathat Woramahawihan become a world heritage, it will be well conserved on a sustainable basis.

Engineering experts are now actively working in the grounds of the Wat Phra Mahathat Woramahawihan to gather information with maximum accuracy. Asst Prof Dr Chainarong Athisakul from the King Mongkut’s University of Technology Thonburi says the team has installed more than 100 cameras to gather the information needed.

“We have also inspected more than 70 locations on foot,” he said, “Our information can be used in combination with pictures from drones. The results will be very detailed”. 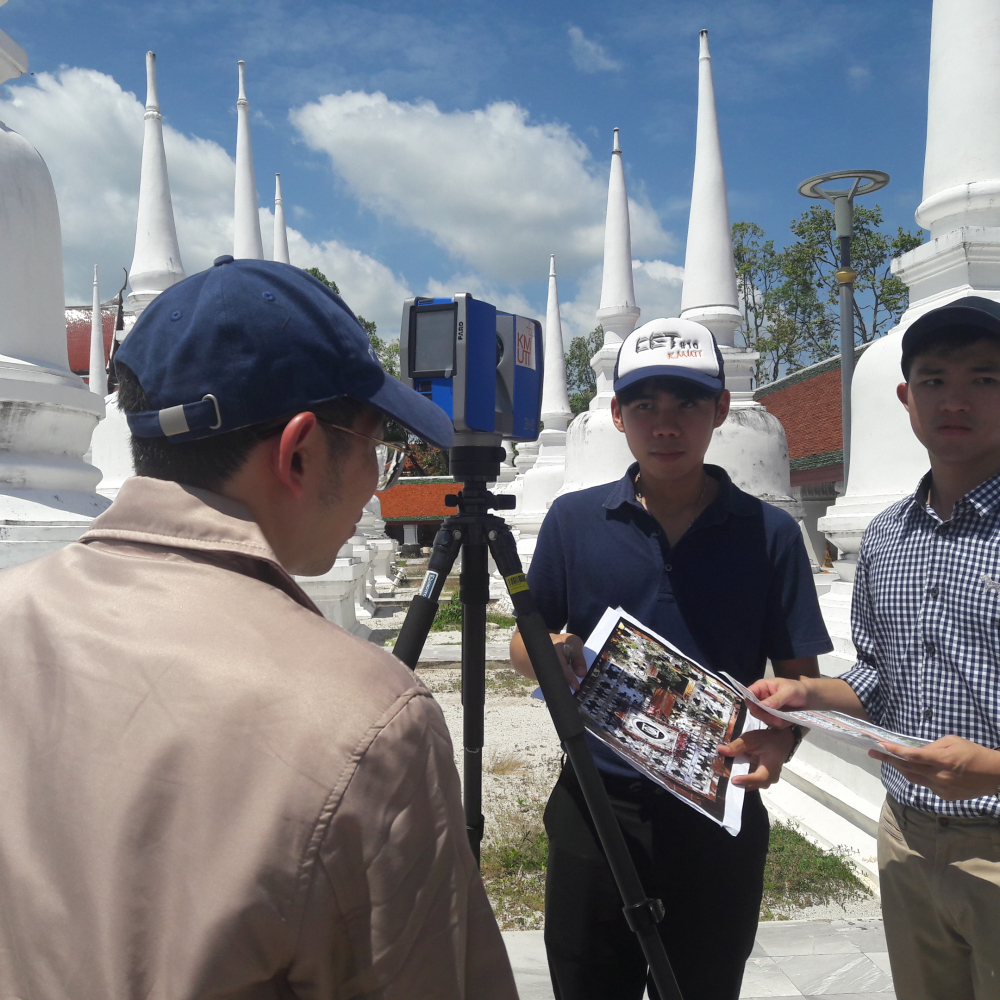 Assoc Prof Nakhorn Poovoradom, who heads the engineering-based conservation of historical site projects, adds that modern tools such as drones are extremely useful in the field of conservation, because they can do what artisans cannot. “It’s too difficult and expensive to erect scaffolding just to check what is on top of ancient structures. With drones, things are much easier and more efficient. Technology also means we don’t have to physically drill into old bricks to check their thickness,” he continues, adding this approach is on par with Italian standards and includes the use of 3D scanning technology, geophysics surveys, drones, 3D simulation, the measurement of vibrations in the neighbourhood and sounding.

Nakhorn says the use of engineering technology for the conservation of historical sites has been used for some time in Thailand. “We have used similar tools at the Chaiwattanaram Temple in Ayutthaya, to name just one,” he explains. “Solid data will make it easier to maintain historical structures in the future as there will be references for future use.” 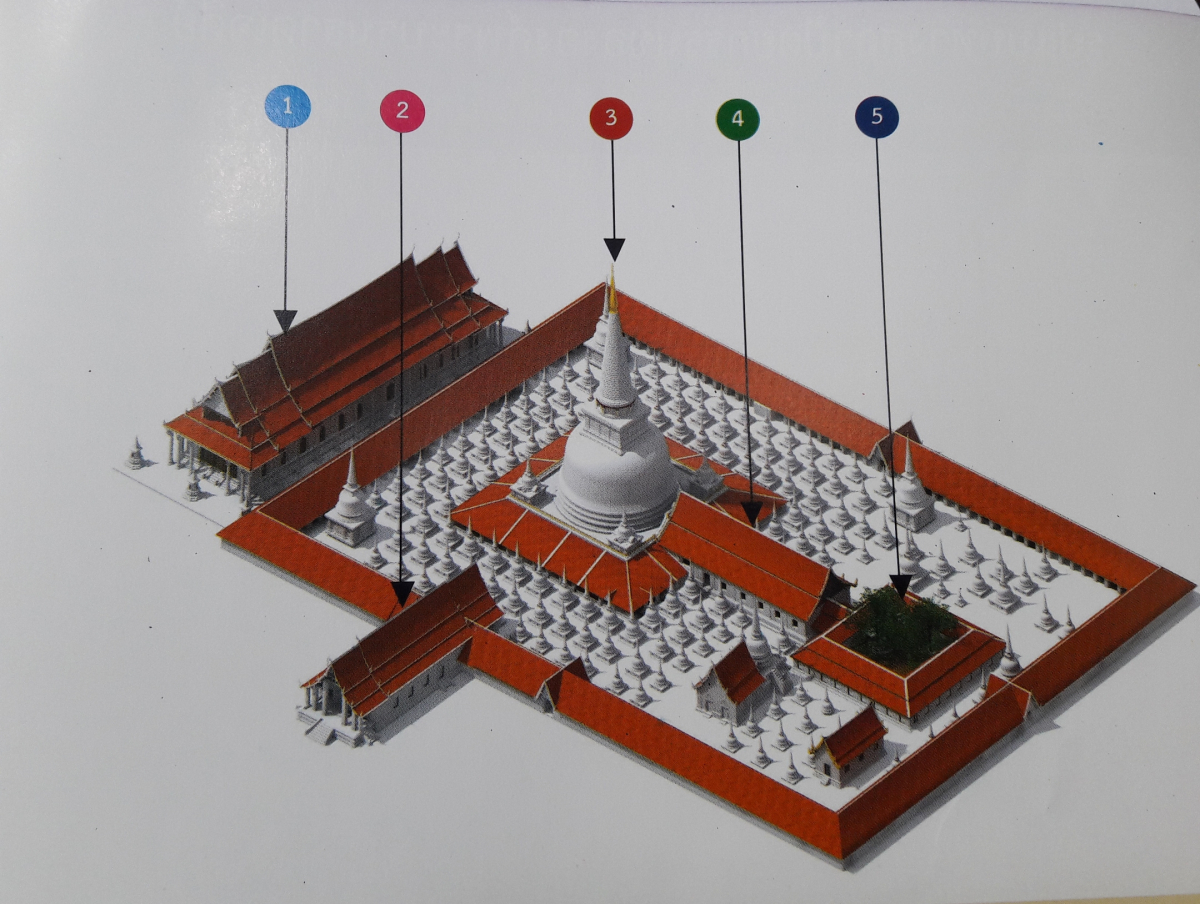 Krissada Chaipaisarn, who teaches at the Thammasat University’s Faculty of Engineering, said pictures taken by drones could also be used in parallel with Virtual Reality technology in a way that enables people to study the historical site without physically being there. “The 3D information can also be used to produce a model as tourist souvenir,” he quips.

The engineering team has already compiled comprehensive and up-to-date data on Wat Phra Mahathat Woramahawihan in relation to its shape, size, slant angle, fractures, engineering qualities and threats. “We have to consider vibration from traffic, wind, and possible earthquakes as they may affect the temple,” Nakhorn explains. According to him, the inspection has revealed that the stupa of Wat Phra Mahathat Woramahawihan leans by 1.45 degrees southeast but the structure is still secure. “Its foundation is strong, probably because trucks are barred from the nearby road,” Nakhorn said, “For conservation purposes, we may have to ensure that the road surface is really smooth to minimise vibration”. 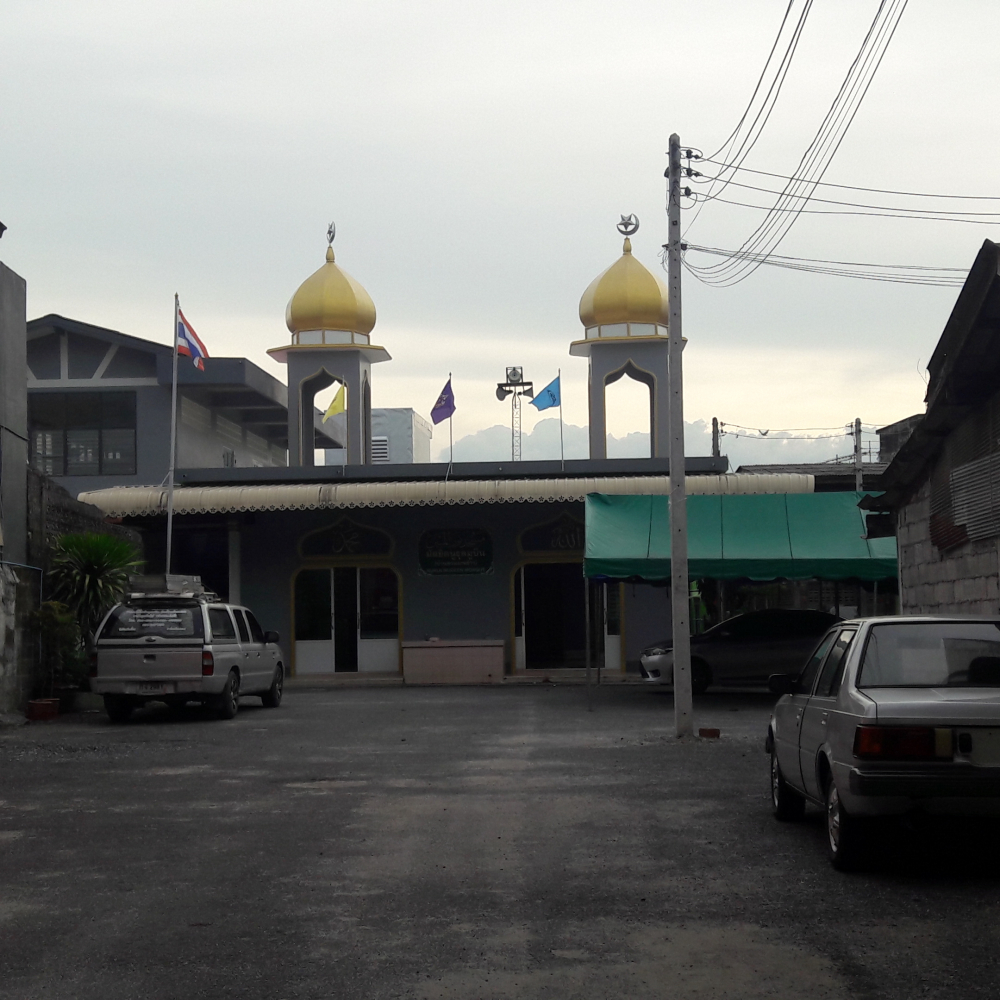 However, many local residents are worried that the inscription of Wat Phra Mahathat Woramahawihan as a world-heritage site may affect their lives. Behind this ancient temple is a community of some 150 families with a mosque as their sacred site.

“Local people are worried that they may be evicted,” says Imam Dej Somjit, 70, adding that he supports the efforts to seek the world-heritage status for Wat Phra Mahathat Woramahawihan but very much hopes that the status will not hurt his community. Manap Phandolar, 79, who produces traditional Chinese rice floor noodle machines, shares the Iman’s concern, saying he worries that if the world-heritage status was granted, the local community might be driven away.

In a bid to promote public understanding of Wat Phra Mahathat Woramahawihan, a new curriculum for local students will include content about the temple. “We will educate locals about its history and its value,” Chatchai says. “This curriculum will be introduced in the coming semester. We trust that the content will ensure the sustainable conservation of Phra Mahathat”. 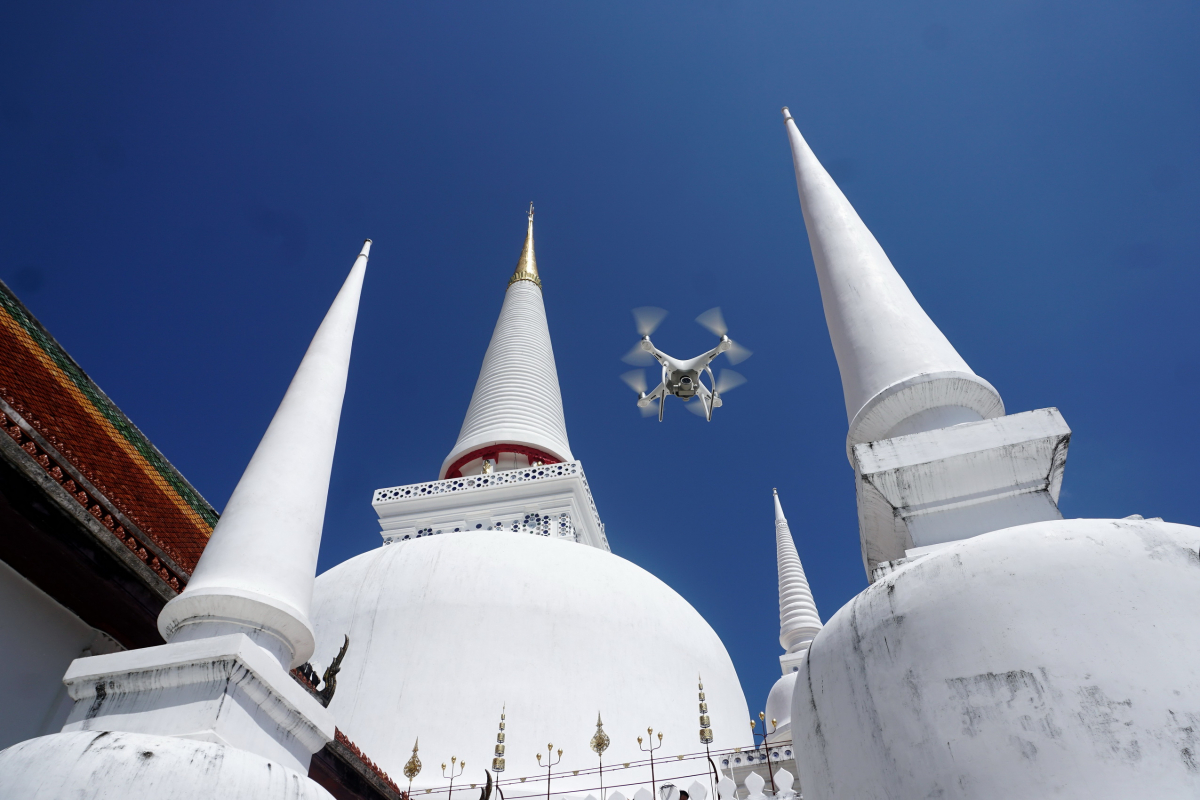 September 2019: Detailed management plan for the ancient temple and public-participation plan will be submitted to Unesco, Paris

December 2019: Response from Unesco is expected.

January 2020: Revised plans (if any) in response to Unesco feedback will be submitted.

Outstanding Universal Value (based on criteria used by Unesco)

Criterion (i): Wat Phra Mahathat Woramahawihan represents the Buddhism’s system of belief through its architectural design and planning. There was divided to be two parts by functional according to the traditional zoning of Buddhist temple. The great stupa is the principle in the temple. The buildings and their elements are plenty of meaning in Buddhist philosophy and the life of Buddha scene. It presents to the human creative genius in conceptual design. Phra Borommathat chedi, the main stupa, not only be a masterpiece of the bellshape stupa in the regional but also a symbol of Theravada Buddhist that the bell-shaped stupa was established in the further land. As a result, the architectural design of the main stupa of this temple presents a masterpiece of the creative genius of the artisans.

Criterion (ii): The principal stupa of Wat Phra Mahathat Woramahawihan preserved with total integrity its original late 13th century CE. architectural structure. Its shape was inspired by Sri Lankan art that followed the Asokan concept of Buddhist art. However, the round section was reduced, resulting in slender. Thus, the bell-shaped stupa, Phra Borommathat Chedi, represents the typical style, differs from that of Sri Lanka, reflecting the successful integration between the local trend and the original Buddhist tradition. Moreover, the relative size of its height and width as 2:1 (H. 28 wa, W. 14 wa; 1 wa = 2 metre) logically implies its complete integrity of corporeal and spiritual aspects; that is to say, according the Buddhist philosophy, there are 28 corporeality and 14 functions of consciousness, so that the height of the stupa is supposed to represent the first and the width of the stupa is the latter. In the ancient time, the bell-shaped stupa was considered exemplary model. Wat Phra Mahathat Woramahawihan’s role as intermediary for the spread of Theravada Buddhist cultures and their arts throughout the territory of Southern Peninsula, and later in other parts of Thailand; i.e., the Sukhothai and the Ayutthaya Kingdoms, was confirmed by the prevailing style of the stupa.

Criterion (vi): The Phra Borommathat Chedi is regarded as the oldest bell-shaped stupa housing the Buddha Relics in Thailand. The temple is directly and tangibly associated with the history of the spread of Buddhism, one of the major religion in the world. The people’s belief in the sacred of Buddha Relics which is one of the most important of Buddhism, has given rise to the merit-making traditions in various forms, literary works, songs, and performance art. All these have lead inexorably to performing of various ceremonies connected with the religious traditions. The merit-making ceremony which is regarded as the grand event of all is Hae Pha Khuen That, literally, carrying robe to wrap around the stupa. Every year on the Buddhist holidays, Magha-puja and Visakha-puja, Buddhists from local areas, other parts of the country and the world pay homage the stupa by organizing a long procession bearing a painted robe joined in a single piece with unlimited length to wrap around the bell-shaped body of the stupa. The large number of Buddhists come every year evidently shows the faith of people in the Lord Buddha and his teachings which has been transmitted over time.