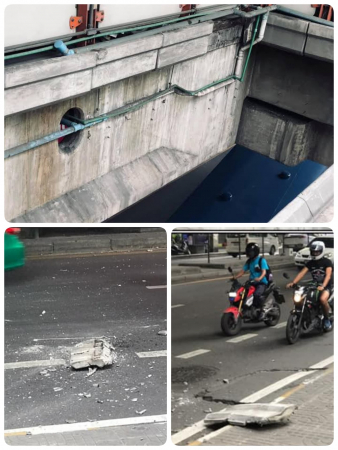 The head of an engineering association has urged the operator of the Bangkok’s elevated railway to regularly check infrastructure after rusty parts reportedly led to a concrete slab falling recently.

Professor Amorn Phimarnmas, president of the Thai Structural Engineers Association, issued the call without taking names. The BTS Skytrain is the only elevated railway, whose structure is also old enough to get rusty.

Amorn said a concrete slab fell from a station of an elevated railway a few days ago, endangering the lives of people and motorists.

Amorn said according to reports the slab fell due to erosion caused by rust in a part of the station. He said it was yet to be studied whether the rust had occurred inside the structure or on the metal fasteners outside the structure of the railway.

He said metal parts of buildings or infrastructure could rust because of several causes.

First, the city’s air has a lot of carbon dioxide released by vehicles. He said the carbon dioxide caused carbonation that reduced the alkalinity in the concrete structure, making metal parts vulnerable to rust.

He said if the concrete that covers the metal parts is too shallow, chemicals could easily seep in and cause rusting.

Amorn said it there was a need to inspect how metal parts are used to fasten concrete slabs of the elevated railway. If the fasteners are improperly installed, the concrete slabs could fall. Moisture from rainwater could also cause the fasteners to become rusty, he added.

Amorn said elevated railways should be regularly checked by experienced engineers using both observations and the half-cell potential technique.

Observations are used to check metal parts outside while the half-cell potential technique uses electric current to check whether metal parts inside the structure have become rusty or not.