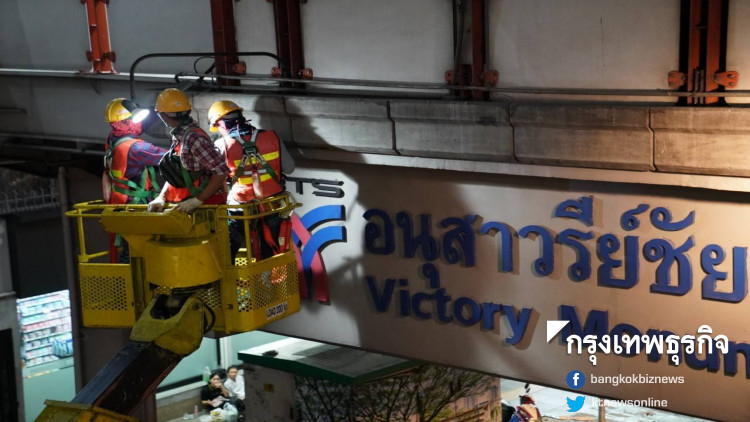 The Bangkok Mass Transit System (BTSC) on Friday night announced maintenance work was underway at 22 BTS Skytrain stations after a concrete slab fell from a station onto the road, almost hitting passers-by.

BTSC executive director Surapong Laoha-Unya announced that the BTSC prioritised the safety of the public and passengers so had ordered special maintenance at all 22 main stations on its green line – the Sukhumvit route from Morchit to On Nut and the Silom route from National Stadium to Surasak.

The order was issued after a concrete slab fell from the Ari station on to the road below, narrowly missing vehicles and pedestrians on Friday.

Surapong said the BTSC has scheduled maintenance services at all stations but the incident had prompted extra checks of the structure outside of stations.

The Skytrain Facebook page announced 96 engineers and 16 cranes are carrying out the checks and maintenance over three days as follows:

– From 10pm on Friday to 5am Saturday, the seven stations of Morchit, Saphan Kwai, Sanam Pao, Victory Monument, Phaya Thai, Ratchathewi and National Stadium were checked.

– From 10pm on Saturday to 5am Sunday, the seven stations of Ekkamai, Phra Khanong, On Nut, Surasak, Chong Nonsee, Saladaeng and Ratchadamri will be checked.

– From 10pm Sunday to 5am Monday, the eight stations of Siam, Chid Lom, Ploenchit, Nana, Asok, Phrom Phong, Thong Lor and Taksin Bridge will be checked.