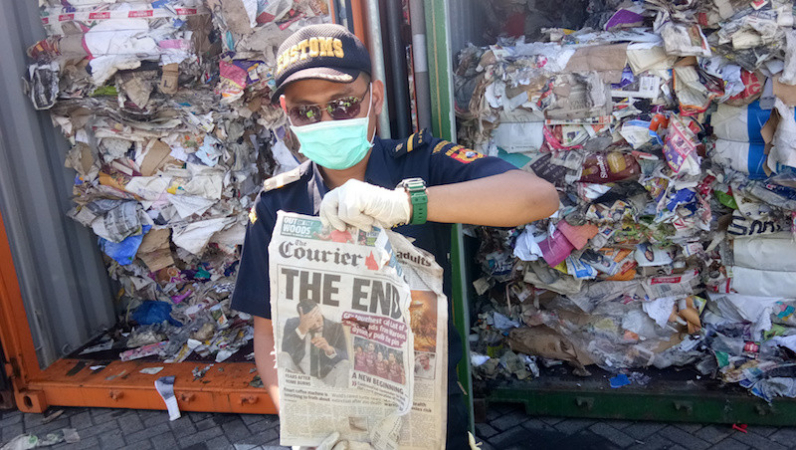 A customs and excise official at Tanjung Perak Port in Surabaya, East Java, holds up the front page of an Australian daily during an inspection on Tuesday. The office is preparing to send back containers of contaminated paper waste to their country of origin, Australia. (JP/Wahyoe Boediwardhana )

A surge of waste imports into cities in East Java has prompted a teenager to write to United States President Donald Trump to protest about the incoming trash.

Aeshnina Azzahra, a 12-year-old from Gresik, East Java, wrote that the river in her neighborhood was “very dirty and smelly” as many factories dispose of their waste carelessly on land and water.

She said she had to write to Trump because the US was among the largest exporters of waste to Indonesia.

“Why do you always export your waste to my country? Why don’t you take care of your own waste,” she wrote in her letter.

Aeshnina also participated in a protest held by environmentalists in front of the United States Consulate General in Surabaya, East Java, on Friday.

She said America’s waste had also polluted Indonesia’s oceans and consumed by marine animals. Expressing her devastation about her neighborhood, Aeshnina hoped that it would one day become clean again. 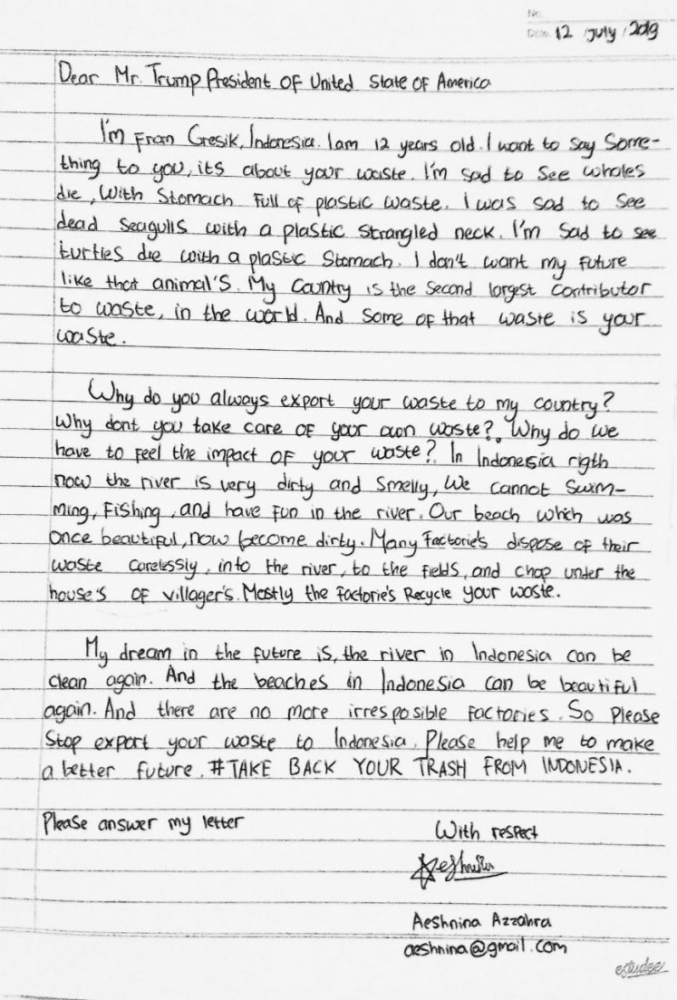 A letter from Aeshnina Azzahra, 12, from Gresik, East Java, to United States President Donald Trump, expressing her devastation about waste flooding her neighborhood. (Courtesy of Bracsip/-)

The Brantas River Coalition (Bracsip), the group that rallied in front of to the Consulate General’s office, delivered Aeshnina’s letter along with its own statement.

Bracsip coordinator Prigi Arisandi said the group had encouraged East Java residents to speak up about how imported trash had deteriorated their neighborhoods.

According to Bracsip, the US exported 150,186 tons of used paper to Indonesia in 2018, six times the size sent a year earlier. It suspected that the overwhelming increase in waste imports was due to the lower prices offered by Indonesian firms compared to other countries.

East Java itself is known as a hub for paper and cardboard producers, with the residents of some villages in Surabaya, Gresik and Mojokerto working as sorters of garbage for the companies.

But the East Java neighborhoods receiving the garbage do not have a proper waste treatment system.

To put an end to the crisis, the government has cracked down ports in Surabaya and Batam, Riau Islands, to stop containers filled with unsorted plastic and paper scraps that have been mixed with toxic and hazardous materials, such as electronic waste.

On Tuesday, the Customs and Excise Office at Tanjung Perak Port in Surabaya announced that it would return eight containers of paper waste from Australia after finding them contaminated with dangerous materials.

Prigi said the office had sent a letter in March to the US embassy but had yet to receive a response.

“At this point, the President [of Indonesia] should send a notification to [the US embassy]” Prigi said. “Indonesia doesn’t accept household waste; we only take paper waste as it could be a source of economy for factories here.” (dmy)