An arrest warrant has been issued for a Deep South-based politician at the Narathiwat Provincial Administration Organisation who was implicated by four drug suspects as the person who hired them to move 459 kilograms of crystal methamphetamine.

National police deputy commissioner Pol General Chalermkiat Srivorakan said on Monday that officers had extended their inquiries and identified the alleged mastermind as Narathiwat’s Waeng district-based politician Kareeya Jehmamah, 58. They then secured an arrest warrant for him on July 12.

The bust stemmed from an investigation into a drug trafficking ring that was based in Myanmar’s border town of Tachileik. It is claimed the gang would smuggle drugs into Thailand via the Chiang Rai border before travelling on to central provinces, Bangkok and the South.

Warawuth and Angsuree were arrested by a roadside in Bangkok’s Bang Khun Thien district where they were driving in a pick-up truck loaded with the “ice”, before police went on to arrest Phosa and Koseng at a gas station in Songkhla province.

In one case, two Thai suspects and a Myanmar national were arrested along with 31.5 kilograms of heroin that were hidden in car tyres and 15 kilograms of “ice” that were discovered at a subsequent house search in Chiang Rai. 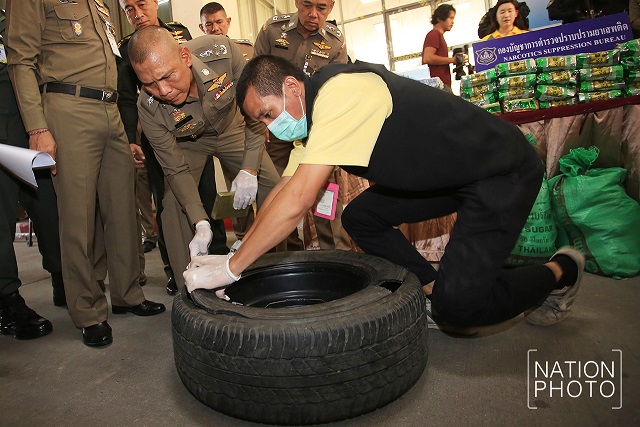 Myanmar hill-tribe man Thana Charoensap, 34, and a Loei woman Sasina Surai, 33, were arrested along with the heroin at a checkpoint in Nakhon Sawan’s Payuha Khiri district and police later arrest their alleged Thai accomplice Anon Ritthiboon, 35, at a hotel in Ayutthaya. The information obtained from their interrogation led police to search a house in Chiang Rai’s Mae Sai district and resulted in the discovery of the 15 kilograms of “ice”, police said. 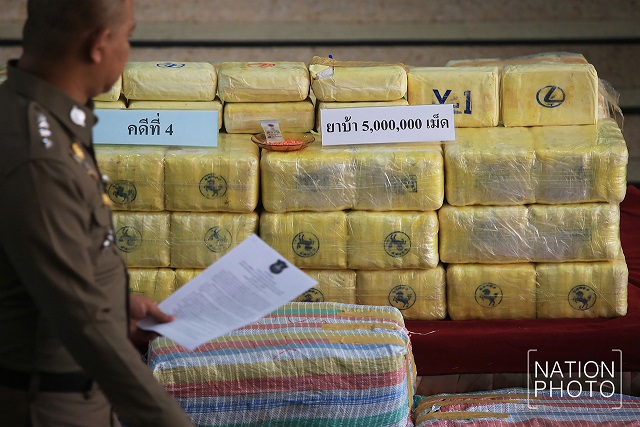 In the other case, a 37-year-old local man, Surachai Muku, was shot dead in a forest behind the Mae Keum Hydro Power Plant in Chiang Mai’s Mae Ai district during a gunfight between a group of 8-10 suspects and police on July 9.

Police then seized from the group five million meth amphetamine pills, 10 kilograms of “ice” and 10 kilograms of ketamine. The other suspects retreated into the forest and evaded officers.