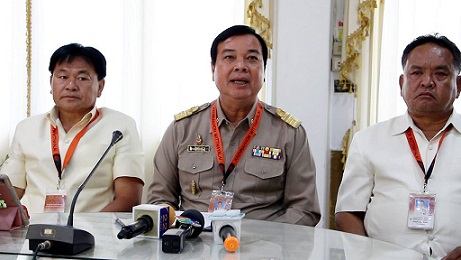 The director of a Khon Kaen secondary school confirmed on Monday that several girls in Mathayom 3 had attacked a classmate during lunch break on July 10 over a Bt4,200 debt that had been only partially repaid.

Weeradech Sata, director of Kaennakhon Witthayalai School, said the parents and guardians of all the girls involved had visited the school Monday morning to discuss what happened and had agreed that no charges would be filed.

The attackers’ parents apologised to the victim and her guardian, a senior relative, and promised it wouldn’t happen again, Weeradech said.

But disciplinary punishment would proceed against the assailants in the form of a penalty to be suspended as long as there is no more fighting.

Weeradech also apologised over the incident, which erupted after the victim was able to repay only Bt2,000 of the Bt4,200 she’d borrowed for an undisclosed reason.

He said his teachers learned later that day that students had been arguing, but only learned of the severity of the incident when they saw video clips of the beating that were widely distributed online.

No teacher was present in the classroom at the time. 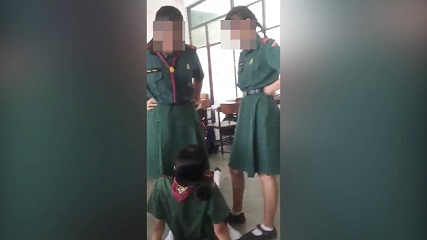 In the videos, six or seven girls watch as a classmate scolds another over a debt. The accused remains unresponsive, so those around her pull at her hair and one kicks her in the back, knocking her to the floor. Someone else then bangs her head against the floor. The victim does not attempt to fight back.

Weeradech said he had instructed all teachers to monitor the school’s 4,270 students and pay close attention to those more prone to violence.

The victim’s guardian said she declined to file charges because all of the girls had been good friends, so they should find their own way to settle the dispute peacefully. She believed the attackers had acted on impulse, heedless of the consequences.

The guardian said the victim told no one about the attack. Her mother noticed her bruises and difficulty moving and took her to a doctor, but the girl claimed she’d fallen down stairs. The family suspected nothing more until they too saw the videos.