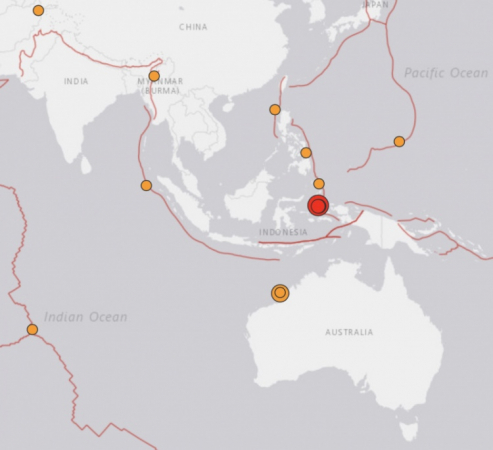 At least two people have been killed after a 7.3-magnitude earthquake shook Indonesia – the second large quake to hit the Pacific Rim of Fire on Sunday.

Earlier in the day a magnitude 6.6 tremor rippled under the seabed off western Australia, matching the largest earthquake ever recorded in the country, in 1988.

The Pacific Tsunami Warning Centre has issued no warnings despite aftershocks continuing in both areas.

Indonesia’s national disaster centre reports that two women were killed and hundreds of residents fled when the Moluccas islands, a tourist hot spot, were rattled by a quake centred 166 kilometres southeast of Ternate, the capital of North Maluku province. The epicentre was measured at a depth of just 10 kilometres. Shallow tremors tend to cause more damage than deeper ones.

Agus Wibowo, spokesman for Indonesia's national disaster agency, told Al Jazeera on Monday that two women were killed by collapsing houses and more than 2,000 people had relocated to temporary shelters. The earthquake was followed by at least 65 smaller aftershocks.

See US Geological Survey map of the quakes.