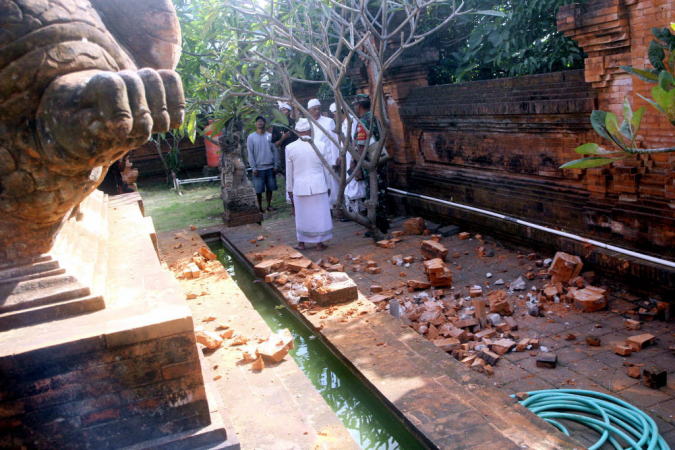 Priests assess damage at the Pura Lokananta temple in Denpasar, Bali, after a 5.8-magnitude earthquake struck the island on July 16. (JP/Zul Trio Anggono)

Bali has returned to normal after a 5.8-magnitude earthquake (earlier reported as a 6-magnitude quake) hit the island on Tuesday morning. People have resumed their daily activities, although some schools closed earlier for the day.

Tourist activities were running normally soon after the earthquake, which caused damage to some schools, houses, temples, government buildings and a Nusa Dua hotel complex.

"There are at least 27 reports of damaged buildings so far, mostly in southern Bali. We are continuously assessing and collecting data of the impact of the earthquake," said Made Rentin, head of the Bali Disaster Mitigation Agency (BPBD).

"People's activities and all activities in tourism are running normally," Rentin added.

The earthquake struck at 8:18 a.m. 83 kilometers southwest of Nusa Dua, a tourist hub in the southern part of the island. The earthquake could be felt across Bali, on Lombok Island and in parts of East Java.

Rentin said no fatalities had been reported so far. Five people suffered minor injuries in Badung and Jembrana, caused mostly by panic action when the incident happened.