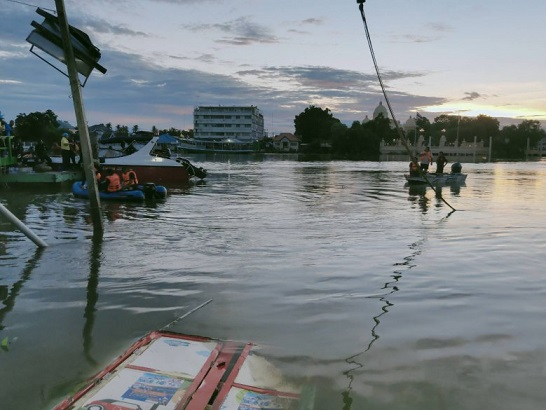 The body of a 24-year-old Thai woman, one of the two people who went missing when a ferry-stop pavilion collapsed in Samut Songkram province on Tuesday, was not yet found as of Wednesday afternoon.

The collapse on the bank of Mae Klong River injured 20.

The first body was found on Tuesday night under the collapsed structure and identified as food vendor Suree Urachuen, 37, while divers continued to look for the body of Pornpilai Sualek, 24, as of 5pm on Wednesday. Head of the diving teams said they pinpointed the area of pavillion that Pornpilai's body would most likely be under the submerged debris but they couldn't yet reach the spot to pull out the body.

Meanwhile, many people have sent in donations of medical supplies, food and other commodities to help the victims, search officials and volunteers, while Sampan Pongpannakul, an executive with Maeklong Concrete Ltd, has offered to put up officials and reporters at a resort.

The traditional Thai-style concrete ferry-stop pavilion was built in 1972.