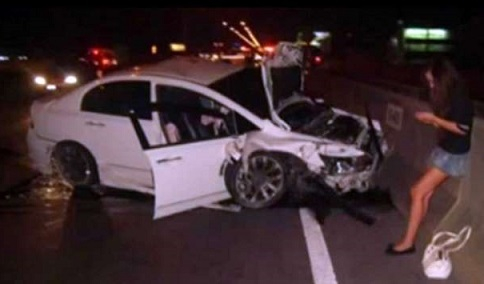 Wealthy teenager “Praewa” leans against a road barrier and uses her phone to send messages just moments after causing the fatal crash of December 27, 2010.

Some of the survivors said on social media earlier this week that they still hadn’t received any compensation, although the Supreme Court finalized the civil case against Praewa on May 8 and ordered her, her parents and the person who lent her the car to pay large sums to the wounded and deceased.

Since the defendants had reportedly not obeyed the court’s order, Tawatchai said the victims could submit a request to a court to issue a legal execution warrant and seize the defendants’ assets instead. He therefore urged the victims to seek help from the Legal Execution Department or the Justice Ministry joint service centre.

The defendants, who didn’t show up to hear the Supreme Court verdict, should have paid the compensation within 30 days but there has been no progress nor any response from them. The lack of action prompted outrage on social media and a revival of the hashtag #แพรวา9ศพ (Praewa Nine Bodies).

Among those voicing his sadness at the defendants’ Iack of action was one of the survivors, Warunyoo “Tintin” Ketchoo, who was 20 at the time.

He wrote on Twitter that while he sustained serious bodily injuries his biggest pain was that the defendants had still not paid any compensation.

“I understand that you didn’t mean to cause the crash, as it was an accident,” he tweeted. “But what to do afterwards, as humans should treat one another, is more important than lawsuits. That amount of money [in compensation] in exchange for being in a crash like that, who would ever want such a deal?”

She is also apparently leading a happy life, having got married in 2014 to a notable politician, a former member of a sub-committee of the National Legislative Assembly’s Standing Committee on Local Administration. That is according to a 2014 post by a Thai Facebook user, who attended the wedding.

Praewa has never been in prison over the crash, having received only a four-year suspended sentence. She was also ordered to serve 138 hours of community service, which she completed in 2016, and banned from driving until the age of 25.

The families of the wounded and deceased filed a civil lawsuit against the defendants, initially demanding a total of Bt113 million, plus 7.5 per cent annual interest until the completion of payments. That has since shrunk to Bt19.8 million, plus interest, or about Bt80,000-Bt1.4 million to each victim.

An insurance company has, however, paid a total of Bt10 million to the victims as per 13 civil lawsuits.