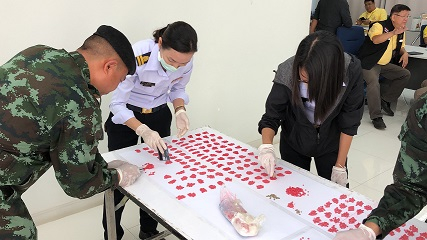 Two men were caught on Wednesday morning carrying 11,000 methamphetamine pills and 400 grams of crystal meth or “ice” hidden in their canvas sneakers as they tried to walk across the Tachilek-Mae Sai border into Chiang Rai’s Mae Sai district.

The customs officials and immigration police noticed that the suspects – Pongpak Paenghom, 19, and Wisanu Piraksa, 30 – were walking with a strange gait as they crossed the border at about 9am, so stopped them for a body search. Upon searching, the officials found the hidden narcotics and arrested them on the spot.

The pair confessed they had been given Bt10,000 to collect the drugs from Tachilek town and deliver them to a customer in Thailand, whose information was to be revealed once they entered Thailand.