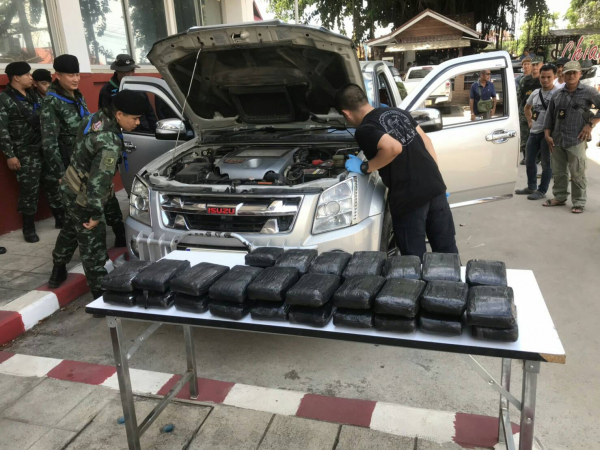 Bags of amphetamines are laid out as a search of the abandoned vehicle is carried out in Chiang Saen district on Wednesday.

A drug suspect ran a checkpoint in a pickup that was later found to contain 200,000 meth-amphetamine pills after the driver abandoned the vehicle in a wooded area following a chase. The suspect escaped into the forest in Chiang Rai's Chiang Saen district.

The incident occurred on Wednesday afternoon, with officers from the Pha Muang Task Force saying the pills were found in the vehicle’s speaker compartments.

The soldiers, working with police, had acted on a tip-off in the morning that an Isuzu D-Max pickup truck – with Chiang Mai licence plate Phor Phor 2715 - would transport a large batch of narcotics from Mae Fah Luang district through Mae Chan, Chiang Saen and Chiang Khong on the way to Wiang Kaen district.

The soldiers and police officers had set up the checkpoint in Ban San That in Tambon Yonok, Chiang Saen district. When they spotted the target vehicle at 1.30pm, they signalled for the driver to pull over. But the vehicle sped away.