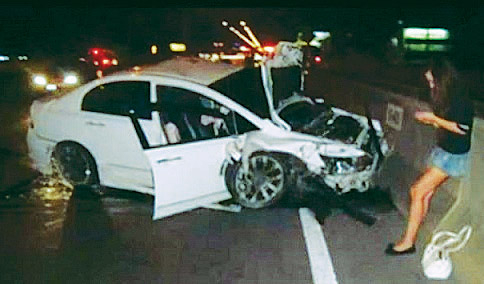 By Supachai Phetthewi
The Nation

The father of young woman killed by wealthy teenager Orachorn “Praewa” Devahastin Na Ayudhya in an expressway accident nearly nine years ago died of a broken heart and depression caused by the loss of his daughter, his wife said.

In an interview with The Nation on Wednesday, Suchada Palakul, said her husband, who was the family’s breadwinner, developed depression and died about a year after the fatal accident that killed their daughter, Trong Sudthankit, and eight others.

The fatal accident has come back into the public attention, with social networkers using the hashtag #PraewaKaoSop (#PraewaNineBodies) and vowing to haunt her after the public were informed that she and her family had so far refused to comply with the Supreme Court’s ruling to pay Bt19.8 million compensation to families of the victims.

Suchada said she believed Orachorn and her parents have been using delaying tactics.

She added that she was saddened to hear that Orachorn’s lawyer saying there was no guarantee how much families of the victims would get paid because Orachorn’s father is a retired official and Orachorn herself is unemployed.

Some of the survivors said on social media earlier this week that they still hadn’t received any compensation, although the Supreme Court finalised the civil case against Praewa on May 8 and ordered her, her parents and the person who lent her the car to pay large sums to the wounded and deceased.

Social networkers became more angry when Orachorn’s photo was shared, showing her during a wedding ceremony.

Suchada said the accident took place not long after her daughter graduated from Thammasat University and had started working at a firm with plans to study for a master degree later.

Suchada said her daughter went to see friends at Thammasat and Suchada and her husband went to pick her up at a BTS Skytrain station but they did not see her and could not contact her over the phone.

The parents were informed after they returned home that their daughter was among the nine persons killed in the accident.

Suchada said her husband became sad and withdrawn. He died about a year later.

Suchada said she had to struggle to survive and was eventually hired by a person she respects so earns enough to live.

She had to move out from her home in Charansanitwonge area to live near relatives so that she would not be too depressed and lonely.

Suchada said Praewa’s parents visited her once at the funeral of her daughter but she was too sad to meet them so they left and she hasn’t seen them since.

She said she respected the court’s ruling but Orachorn and her parents instead declined to comply with the rulings.

Suchada said he would consult with her lawyer on what to do next.

The families of the wounded and deceased filed a civil lawsuit against the defendants, initially demanding a total of Bt113 million, plus 7.5 per cent annual interest until the completion of payments. That has since shrunk to Bt19.8 million, plus interest, or about Bt80,000-Bt1.4 million for each victim.