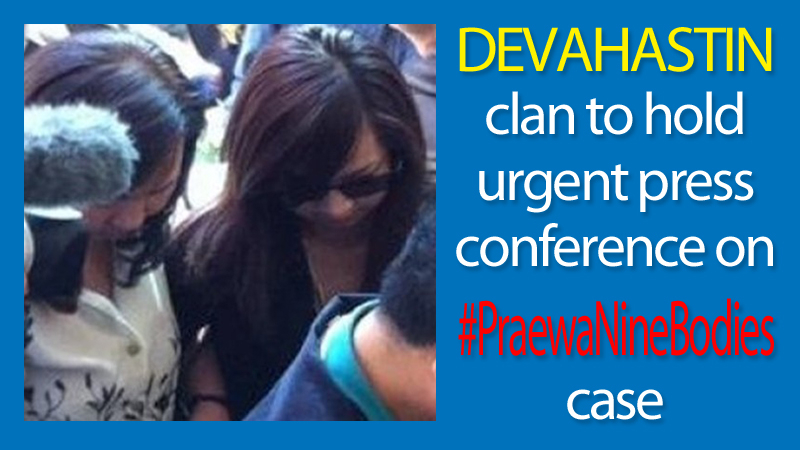 The Devahastin Na Ayudhya clan has said it will hold an urgent press conference today following the public outcry on the social networks that Orachorn “Praewa” Devahastin Na Ayudhya has declined to honour a court ruling to pay compensation to families of nine persons she killed in a road accident nine years ago.

Suchai Devahastin Na Ayudhya, a senior member of the clan, sent an urgent letter to the media, inviting them to attend a press conference at the Ploen Restaurang on Vibhavadi Rangsit road at 4pm Thursday (today).

Related story: Father of one of victims of #PraewaNineBodies died of broken heart: wife

The clan’s lawyer Natthapol Thongkham will also be present. The invitation letter added that the clan would be sending representatives to meet with and express condolences to the families of the victims.

The letter said that the clan has never ignored the case and has constantly told Orachorn’s family to comply with the judicial process. Reporters will be allowed to ask questions during the press conference.

Facebook users and members of other online social networks started posting on #PraewaKaoSop (#PraewaNineBodies) after some families of the victims stated in their Facebook posts that Orachorn and her parents had so far declined to honour the Supreme Court’s ruling to pay them compensations.

On Wednesday, Gen Wit Devahastin Na Ayudhya, a former member of the National Legislative Assembly, threatened to sue any social networker linking the Devahastin name to the issue.

He said the Devahastin is a surname granted by a king and the case was a personal issue so anyone deemed to damage the reputation of the clan would face a lawsuit.

He said the accident was related to just one person so it was not fair to hold the entire clan responsible or attack those who hold the name.

“So, anyone who links the surname or the clan to the case in the social media posts will face legal action,” Wit said.

He said he would seek legal actions for alleged violations of the Computer Crime Act against all persons damaging the family’s name.