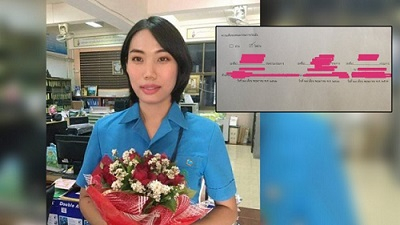 A transgender teacher’s assistant at a school in the Northeast has been subjected to discrimination to such an extent that it has affected her welfare and promotion, Thai activist Nada Chaivajit claimed in a Facebook post on Wednesday.

Teacher’s assistant Ukrit Jadsanam may be out of civil service due to “very” low marks in her evaluation, which she believes stem from her supervisor/school director’s bias because they cannot accept the fact that Ukrit insists on wearing a woman’s uniform. She believes wearing women’s clothing is within her rights backed by the Constitution and the 2015 Gender Equality Act.

The price she has paid in trying to maintain her identity has included “unfair” accusations and pressure and even being called “living garbage” in a group chat, Nada quoted Ukrit as saying. Nada also said that Ukrit has agreed to reveal her identity because she was ready to fight for justice.

Ukrit said she had received a formal warning over an alleged inappropriate act that she could not have committed because she wasn’t there – her absence was further proved by her cellphone signal. The letter also accused her of setting a bad example through her choice of clothing and hairstyle.

The warning was followed by “very” low marks in her evaluation, which Nada said will translate into Ukrit not being able hold down a job in the civil sector. During her five-day evaluation, Ukrit was reportedly given many reasons on how she wasn’t suitable to be a teacher and every time the assessment ended with the comment: “A gender-type like yours is not acceptable by anyone.”

Ukrit was also pressured into agreeing to sign a constent to undergo “behavioural improvement”, which requires her to wear appropriate clothes and have a hairstyle that is suitable to a teacher in a state school according to the Prime Minister’s Office regulations and the Government Teacher and Education Personnel Act. She was also threatened with disciplinary punishment.

Nada also said that among 28 schoolteachers, Ukrit was the only one to get a mere 1 per cent salary increment, which translate to just Bt180.

“Are we going to allow this to happen to a fellow human? A person who has the knowledge and ability to teach to young generations? Is her human dignity so low that a school executive can call her ‘living garbage’?” the activist asked in her post.