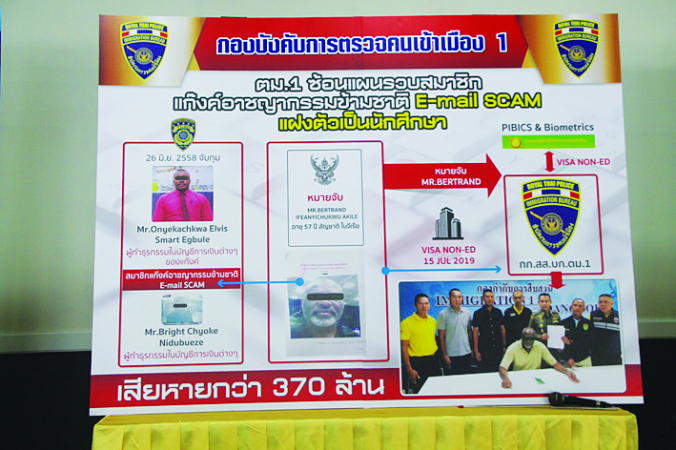 A Nigerian man has been arrested for allegedly deceiving customers of a firm to wire him and his accomplices up to Bt370 million.

Sompong said Akile was arrested under a warrant issued by the Criminal Court on September 14, 2011, on charges of collaborating with others to forge documents and using them to impersonate others as well as uploading false information and being part of an international criminal gang.

Sompong said Akile was nabbed after his two accomplices, Bright Chyoke Nidubuze and Omnyekachuawu Elvis Smart Egbule, had been arrested in 2015 for the same charges.

He said Akile had been on the run since 2005 after he and his accomplices forged an email account of a company to send emails deceiving clients of the firm to transfer money.

The officer also said the Immigration Police Division 1 found that Akile had applied for a visa extension using a new passport, but the bureau’s biometric identification system helped identify him as a suspect wanted under an arrest warrant.