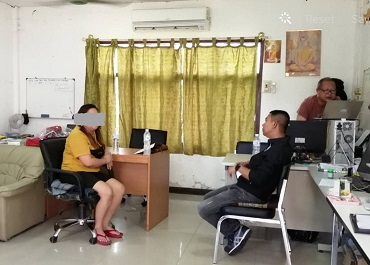 A former pharmacist known as “Mor Dear” was arrested on Friday and charged with a variety of offences in connection with the sale of unlicensed weight-loss pills. Some were allegedly laced with the banned and dangerous appetite suppressant sibutramine, resulting in the death earlier this month of a 30-year-old woman.

“Mor Dear”, 31, who has apparently changed her name from Sujitra Lertsongkhram to Jinna Nichakhunwas, was arrested at 10am at a house in Muang Bung Kan in the northeastern province of Bung Kan as she was reportedly about to flee the country.

A superintendent, Pol Colonel Kittipong Pansri, led the raid after an arrest warrant for Sujitra was issued by Kalasin Court.

Her arrest came 24 hours after her brother Thanakorn Lertsongkhram, 26, was nabbed in Khon Kaen and a third suspect, Kritchakorn Butwiset, 36, was held in Kalasin.

Police have made swift progress in the case after the death in early July of a woman in the central province of Ang Thong.

Officers soon established that she died after ordering weight-loss pills from a Facebook page “OBE care clinic”, which in turn had bought the pills from a factory operated by Sujitra’s mother Wasapassorn Su-amnat, 52, in Kalasin’s Na Mon district.

Sujitra, who lost her licence to work as a pharmacist and received a two-year suspended jail sentence over a previous medication offence, was identified as the person who supervised the running of this online “clinic”.