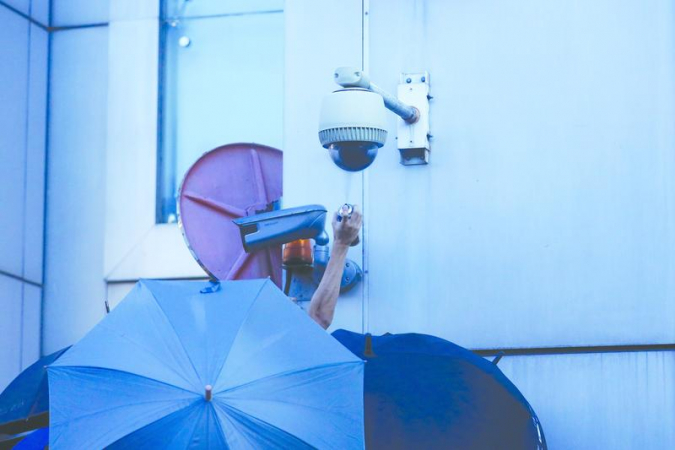 A CCTV camera outside the Liaison Office of the Central People’s Government in the HKSAR is defaced by protesters. (PHOTO BY CHINA DAILY)

Central authorities responsible for Hong Kong affairs have sternly denounced radical protesters who besieged and vandalized the liaison office — one of the three central government institutions in the special administrative region, saying such acts are “absolutely unacceptable”.

In a statement issued late Sunday night, the Hong Kong and Macao Affairs Office (HKMAO) of the State Council said these violent acts are a blatant challenge to the central government’s authority over the SAR, and have trampled on “one country, two systems”.

Radical protesters had earlier veered off from a generally peaceful public procession on Hong Kong Island on Sunday afternoon against the now-suspended extradition amendment bill, and headed for the Liaison Office of the Central People’s Government in the HKSAR in Sai Wan.

The national emblem mounted at the office entrance was also defaced with black liquid, and graffiti with vulgar language were painted on the outer wall.

Given the serious nature of the matter and the adverse effect it has on the city, the HKMAO said such acts are totally unacceptable and should be handled in a timely manner by Hong Kong law enforcers.

It also pledged strong support for the SAR government in taking all necessary means to protect the central government’s institutions in Hong Kong, as well as the city’s law and order.

The Liaison Office of the Central People’s Government in the HKSAR also issued a statement expressing its strong indignation and condemnation of such radical behavior.

Such acts have not only violated Hong Kong’s Basic Law and other local regulations, but also severely challenged the bottom line of “one country, two systems” and the central government’s authority over the SAR, a liaison office spokesperson said.

Hong Kong people should see clearly the violence done by the radical protesters and stand firm in safeguarding the rule of law, and “one country, two systems”, the spokesperson said.

The three central government’s institutions in the HKSAR are the liaison office, the People’s Liberation Army Hong Kong Garrison and the Office of the Commissioner of the Ministry of Foreign Affairs in the HKSAR.