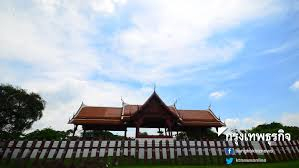 Activist Srisuwan Janya and a group of Ayutthaya citizens asked the Ombudsman on Monday (July 22) to determine whether the heads of the government’s Fine Arts Department and Ayutthaya Historical Park had blundered in the restoration of the Ayutthaya Royal Elephant Kraal and possibly misappropriated funds earmarked for the project.

Piya Leudechakul, director of Complaint Investigation in the Ombudsman’s Office, was urged to investigate the two individuals, who he said would be discharged or transferred if found guilty of wrongdoing.

Srisuwan said the wooden elephant compound was restored unlawfully in that the Fine Arts Department cut off the tops of supporting Talung pillars, thus overriding historical accuracy, and excluding citizens from the planning process.

He claimed the expenditure on the restoration was “suspiciously high” at Bt35 million for work on 846 pillars, noting that 980 pillars were restored in 2007 at a cost of just Bt16 million.

“The Royal Elephant Kraal has undergone several restorations,” he said, “and each time we try to preserve historical accuracy based on general knowledge, which states that each Talung pillar must have a lotus-shaped top.

“However, the Fine Art Department’s recent work was based on photographs of a temporary elephant kraal taken by foreigners about a hundred year ago. They completely ignored the historical context and the knowledge of local people.”

The department came under fire earlier this year because of the work, Srisuwan noted, but it didn’t correct the mistakes. Instead, it halted the project altogether, having paid contractors Bt24 million in fees.