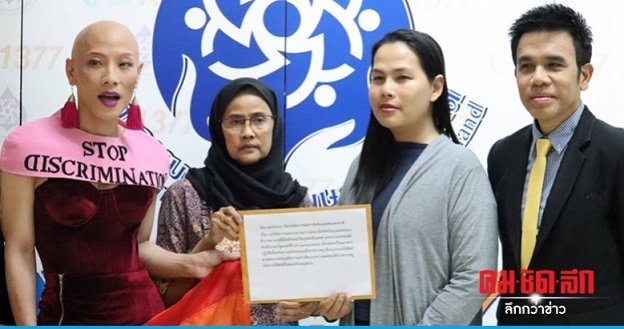 An LGBT-rights group on Monday asked the National Human Rights Commission (NHRC) to determine whether a transgender teacher’s assistant in Buri Ram is the victim of discrimination affecting her welfare and career.

The allegation is contrary to the insistence earlier this week by executives at the school that all teachers and assistants were evaluated based on appropriate criteria including performance.

Led by its president, Kittinan Tharamathat, the Rainbow Sky Association of Thailand presented a petition to NHRC commissioner Angkhana Neelapaijit at the agency’s head office in Bangkok.

“The teaching profession has never discriminated against any gender, but people’s bias does,” Kittinan said.

Angkhana agreed to propose an NHRC investigation and said teachers should be fired only in the event of a serious breach of discipline, not based on the belief that the teacher’s behaviour might threaten a school’s reputation.

Angkhana also noted that regulations on teacher attire were out of date and not in line with the Constitution or gender-equality law.

Apaporn Plaengthaisong, acting deputy director of the school in Buri Ram’s Nang Rong district, maintained earlier this week that the transgender teacher’s assistant hadn’t been “bullied” and that her routine six-month evaluation was aimed only at improving her behaviour and the performance of her duty.

She said the school had signed a 10-point agreement with the teacher’s assistant covering “communication attitude” with students, appropriate behaviour and adherence to government rules on public schoolteachers’ attire and hairstyle.

The teacher’s assistant received a poor evaluation only as part of the first half of the process and could still do well in the second part, Apaporn said.

“The school never thinks a person of a different gender might be bad at work or should fail in the evaluation. The school committee based its scrutiny on performance. There is no discrimination or bias,” Apaporn said, adding that six transgender teachers or other personnel were employed at the school.

Transgender teacher Jakkapan Pengprakhon said she had worked at the same school for eight years and never encountered discrimination.

She said all teachers should be assessed in performance to ensure maximum benefits to the students. “You have to prove your ability in the job, not just demand gender rights. What will convince people to see your worth is your work results.”

The matter came to the public’s attention last week when activist Nada Chaivajit claimed on Facebook that teacher’s assistant Ukrit Jadsanam, hired last October, could be sacked due to “very” low marks in her evaluation, which Ukrit felt stemmed from her superior’ bias against her wearing a woman’s uniform.

Nada quoted Ukrit as saying that the price she has paid for trying to “maintain her identity” has included “unfair” accusations and pressure and even being called “living garbage” in a group chat. Ukrit got the low marks on her evaluation and a mere 1-per-cent salary increment, amounting to just Bt180, according to Nada.

Tanwarin said Ukrit told them she was worried about damage to her career advancement because of the pressure she felt at work, while being barred from wearing women’s clothing affected her morale, confidence and work efficiency.

Tanwarin said the team would hear the school executives’ side and raise the matter in Parliament. “This is why we’ve been trying to get a standing committee on gender diversity,” she said. “A case like this could represent the beginning of all sides coming to an understanding on gender diversity in the schools.”