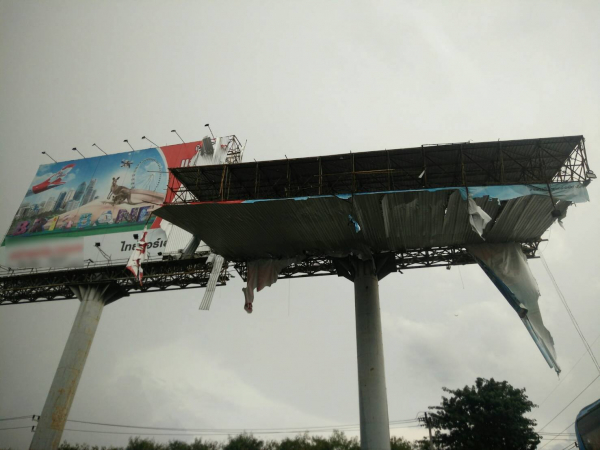 Bangkok Metropolitan Administration officials ordered the owner of a giant billboard structure in Don Muang district to urgently take it down after the pole holding it collapsed causing the sign to hang over the road and pose a danger to passing vehicles.

The giant billboard in front of Soi Vibhavadi-Rangsit 72, which appeared old and rusty, partially collapsed during Tuesday evening’s heavy rain and strong winds.

The Don Muang district office and the BMA’s Disaster Prevention and Mitigation Department as well as the Metropolitan Electricity Authority set up an operation centre near the billboard early Wednesday to direct the removal operation for fear that the sign would fall on passing vehicles.

The owner of the billboard sent a crane to support the billboard while workers used gas cutters to cut the metal into smaller sections to remove it.

Don Muang district director Worapoj Nimsuwan said the owner of the sign cooperated fully in the removal and would shoulder all the costs.

Worapoj added that officials from the district office would check all the remaining giant billboards to prevent more collapses.