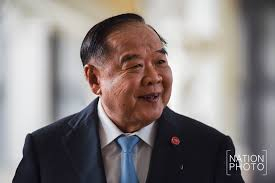 Deputy Prime Minister Gen Prawit Wongsuwan arrived at the TOT auditorium for the government policy debate Thursday morning with a smile on his face even though he is expected to be a main target during a showdown with the opposition.

He came with his staff and was welcomed by a group of Phalang Pracharat MPs before being led to the elevator on the way to the meeting room.

Prawit, who played a key role in the 2014 coup, is expected to be a main target of the opposition during the policy debate. Political observers view him as one of the weakest links in the Prayut II government.