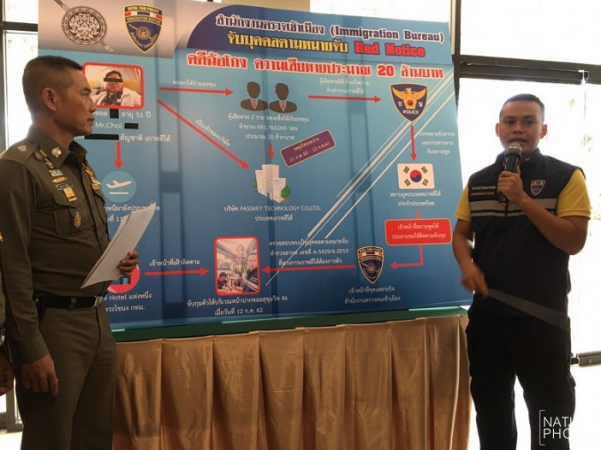 A 51-year-old South Korean man, who was wanted on an Interpol warrant for a fraud case involving damages worth 692,762,000 won (about Bt20 million) in his home country, was arrested on July 12 in Bangkok, Immigration Police Bureau chief Pol Lt-General Sompong Chingdoung told a press conference on Thursday.

After being contacted by the South Korean Embassy to help locate the man, police searched for the fugitive, whose name was released to the media only as Choi, Sompong said.

The wanted man was an executive at South Korea-based financial company Fasskey Technology Co Ltd. He allegedly fraudulently lured two male investors identified only as Lee and Won into buying the company’s shares worth 692,762,000 won (about Bt20 million) between February 21, 2017 and February 12, 2018 before fleeing to Thailand, Sompong said.

A police probe found that Choi was travelling in and out of Thailand, and with each entry he would move his residence to avoid detection. After his latest entry on June 11, he checked into a Phra Khanong hotel before being arrested near Soi Sukhumvit 46 on July 12, Sompong said.

Police will revoke the man’s visa and send him back to face prosecution in his home country, he added.

Songpong said the Immigration Police Bureau was being strict in suppressing and watching out for foreign criminals wanted by the authorities. He encouraged people to alert police to any suspicious person via its hotline 1178 or through the website www.immigration.go.th.