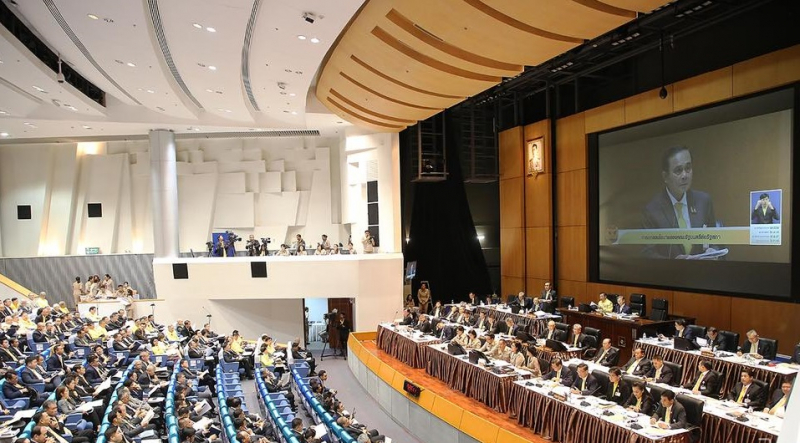 The party’s secretary-general said the 35-page policy statement presented earlier by Prime Minister Prayut Chan-o-cha resembled nothing better than rushed homework, adding: “These policies can be summarized in 3 words: vague, indecisive and deceptive.” 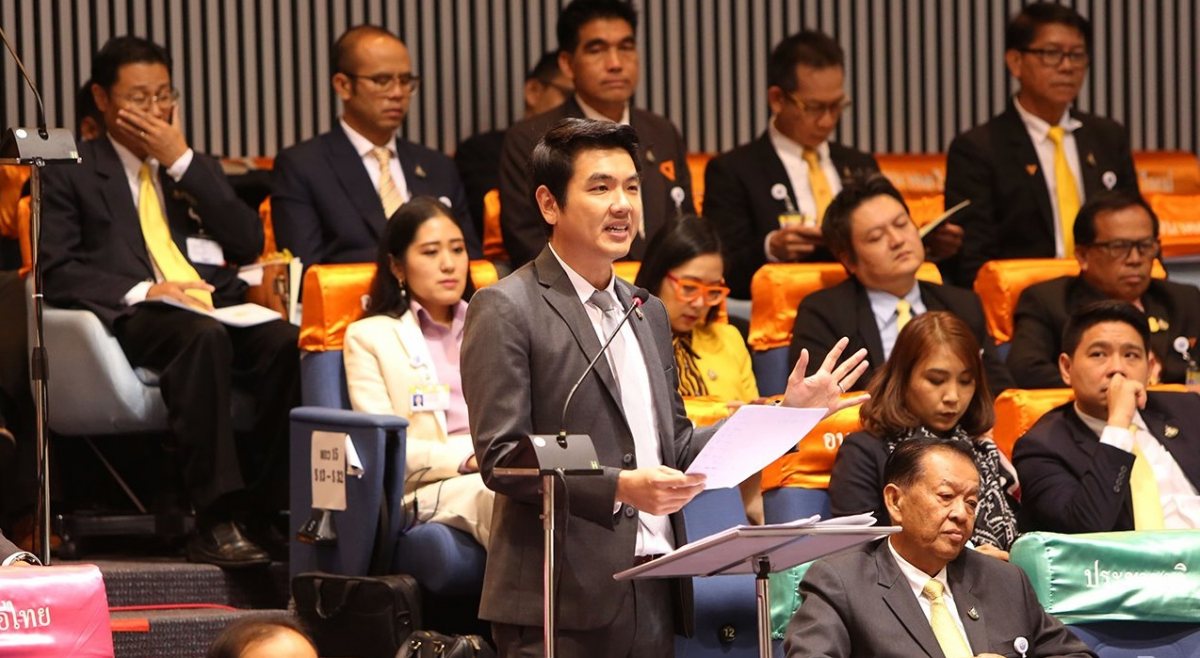 He didn’t finish there, describing the policies as just “lists of random, unrelated issues with no focus or clear objectives whatsoever”.

Said the party list MP: “They are full of vague words like ‘development’ and ‘promotion’ but contain no steps leading to practical implementation. Some of the policies are indecisive and self-contradictory, such as the forest reclamation clause, which is listed together with the policy that promotes coexistence of people and the forest, or the guarantee of corps prices and farmers’ revenues, which clearly cannot be done simultaneously.

“The government’s policies are also deceptive, as many of the promises they made before election are not adequately met, while some are downright omitted, such as the Bt425 minimum daily wage, tax exemption for new graduates and the cancellation of compulsory military service.”

Piyabutr didn’t place the blame solely on the government, however, but said this was the nature of coalitions. “With 19 parties in the government, surely they can’t list all the promises made during election campaign in the policy statement,” he said.

The debate continued to heat up in the evening, when Saranwut Sarankate, a Pheu Thai party MP from Uttaradit, questioned the government’s failure in economic matters over the past 5 years.

He said Thailand seemed to be frozen in time while neighbouring countries like Singapore and Vietnam enjoyed the privileges of a free trade agreement (FTA) with the European Union.

He also claimed the government’s measures to boost the economy only benefited rich Thais and foreigners. These included the proposed high-speed train project connecting 3 airports in the Eastern Economic Corridor (EEC), investment privileges in the EEC and welfare cards that swelled the profits of some retail giants. Meanwhile, he said, poor people couldn’t even apply for financial aid they were eligible for because they had been blacklisted by the credit bureau.

“I suggest the dissolution of the credit bureau to unshackle low-income earners,’ he said. “If that can’t be done, the government should at least consider lowering the credit requirement for government-sponsored loans to reduce the disparity between the rich and the poor.” 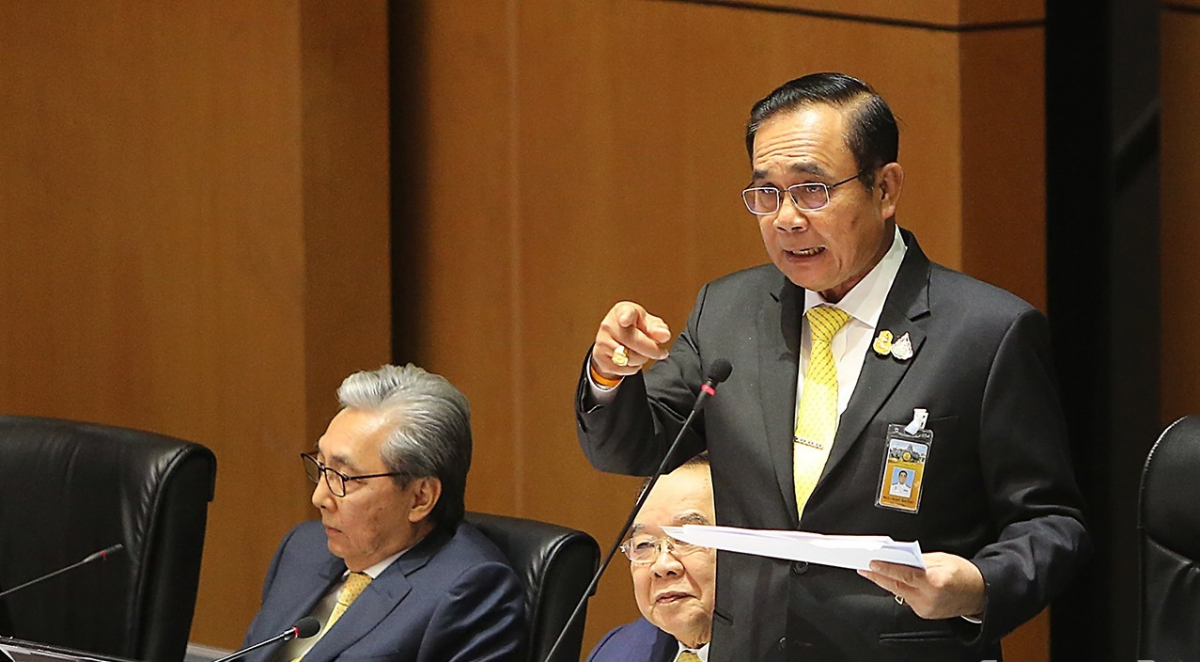 When it was Prayut’s turn to respond, he explained that economic disparity was a common occurrence in countries with free economies and the reason the government couldn’t deliver Bt425 minimum wages as promised was because there were currently both Thai and foreign workers in the market and the wages needed to be adjusted to suit everyone.

As for foreign trade, he said the government was pushing for the Regional Comprehensive Economic Partnership (RCEP), which would significantly lift the country’s exports.

“I wouldn’t say the economy is bad throughout the country,” said Prayut. “Sure, retail and SMEs [small and medium-sized enterprises] may experience decreasing sales but that’s because people tend to go shopping online more nowadays.

“Every business has to adjust its strategy to fit the changes in the modern market and technology. It’s not fair to blame the government for your own lack of adaptability.”

As for some people’s inability to borrow money, Prayut said the government had already tried lowering the requirements but this had only resulted in increasing the number of people defaulting on their loans.

Lastly, he reassured that all the government’s projects would have transparent bidding processes and that anyone could participated if qualified. Therefore it was not true that the government sought to provide benefits to certain group of rich individuals, as alleged by Saranwut.

A good word for the government then came from Pharadorn Prissanananthakul, a Bhumjaithai party MP from Angthong, who supported its policy of guaranteeing farmers’ income. He did, however, suggest adding a “profit-sharing” scheme to this plan. This would entail pooling all the profits from selling each type of crop, and then sharing them among growers, processors and sellers.

“Such a profit-sharing scheme has proved to be successful with sugarcane, so we should be able to adapt it to other major crops like rice and tapioca as well,” he said. “In the past, it has only been rice farmers who have suffered from plummeting prices, not the millers and sellers. This signals an unfair risk split between the three parties.”

Natural Resources and Environment MinisterVarawut Silpa-archa defended the government in relation to its forest reclamation policy, saying it was intended to punish capitalists and entrepreneurs who trespassed in the forests for commercial gains.

Meanwhile, the policy related to people co-existing with the forests aimed to provide poor people with land that they could farm without surrendering permanent ownership under the regulations stated in the National Land Policy. Until now that policy has allotted 500,000 rai of land to people living near denuded forests to prevent further trespassing and promote forest rehabilitation. as well as natural resources conservation. 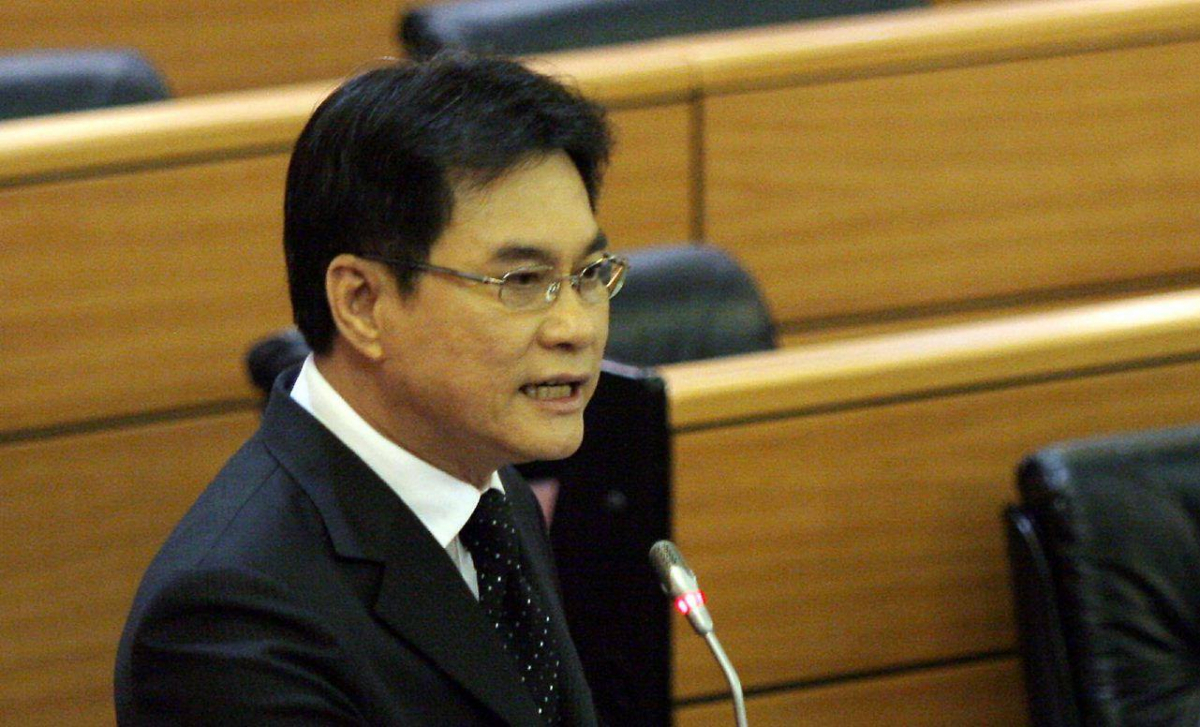 Last speaker on day one was Commerce Minister Jurin Laksanawisit, who tried to explain the ambiguity of the crops price guarantee and farmers’ income guarantee earlier questioned by Piyabutr.

“The government is focused only on guaranteeing farmers’ revenue,” he said. “As intervening in the pricing mechanism is against WTO [World Trade Organisation] regulations.

“This policy aims to provide farmers with appropriate financial aid in the event of plummeting crops prices but the government will only pay the difference from normal prices. Crops eligible for such a revenue guarantee program are rice, rubber, tapioca, oil palm and corn.”

Jurin added that the government was looking to add a “contract farming” plan into its policy. This would pair growers and buyers, with an agreed price set in advance. This way, he said, farmers’ revenue would be guaranteed while buyers could also rest assured that they would not run short of high-quality raw materials.