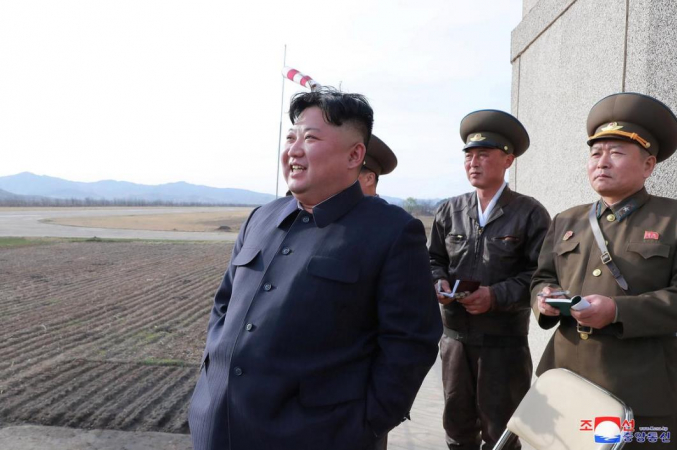 The DPRK launched the missiles from the eastern coastal city of Wonsan, one of them flying about 430 kilometers and the other 690 km out over the sea, Reuters said. They both reached an altitude of 50 km before splashing down, the report cited an anonymous Republic of Korea Defense Ministry official as saying.

The second missile appeared to be "a new design that had not been seen before", and a detailed analysis was being done to verify the object's qualities, the official added.

It was the DPRK's second launch of short-range projectiles this year as the country fired two similar projectiles on May 9, Xinhua News Agency reported. Those projectiles flew about 420 km and 270 km.

A statement from the ROK's National Intelligence Service said the projectile launches are a protest against the planned ROK-US 19-2 Dong Maeng joint military exercises scheduled for next month.

Foreign Ministry spokeswoman Hua Chunying said on Thursday that China is aware of the launch and different parties' reactions, and that it believes the DPRK and the US should restart talks as soon as possible.

The DPRK's Foreign Ministry warned last week that Pyongyang might call off upcoming working-level negotiations with Washington if the military drills take place.

Denuclearization talks between the DPRK and the US remain deadlocked after the Hanoi summit in February between US President Donald Trump and DPRK top leader Kim Jong-un broke down without a deal. They failed to reach common ground on the scope of Pyongyang's denuclearization and Washington's sanctions relief.

On June 30, Kim and Trump agreed to resume working-level talks on denuclearization as the two leaders met at the peninsular border village of Panmunjom.

It is a common aspiration of the international community for the two sides to resume talks as soon as possible, Hua said.

All parties involved should cherish the hard won momentum for dialogue, show goodwill and work together for the peninsula's denuclearization and a political resolution of the peninsula issue, Hua said.

Analysts said Pyongyang's latest missile launches may have a negative impact on prospects for future talks.

Li Chengri, a researcher at the Chinese Academy of Social Sciences, said the aims of Thursday's missile launches are twofold. "First, the calibrated move is a protest of the planned US-ROK military exercises next month. Second, it also adds to Pyongyang's bargaining power ahead of possible nuclear talks with Washington."

Li added that launching short-range missiles is a vital negotiation tactic of Pyongyang when dealing with Washington as it believes it can pressure the US to come up with proposals that are closer to Pyongyang's demands.

Lee Jung-nam, a professor at the Asiatic Research Institute at Korea University in Seoul, said the impact on future DPRK-US talks will be "limited" because Pyongyang does not wish to turn away from dialogue.

"It is in a way a diplomatic gesture from Pyongyang calling on Washington to lower the hurdles, which is to ease the terms of denuclearization if they want the working-level talks to proceed," Lee said.