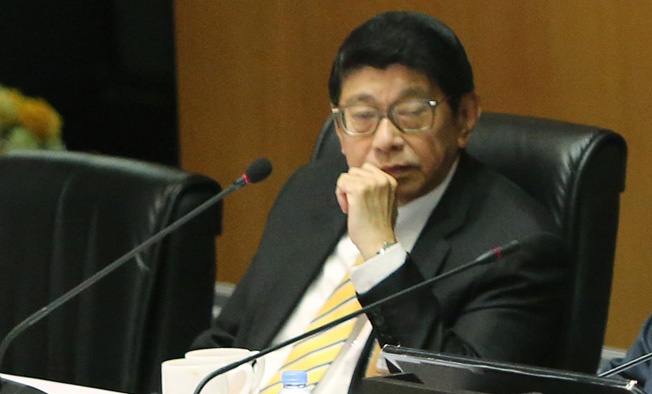 Deputy Prime Minister Wissanu Krea-ngam defended Prime Minister Gen Prayut Chan-o-cha during the first day of the policy debate on Thursday after an opposition MP said Prayut was not qualified to contest the post of prime minister.

The debate started by Wan Yubamrung, a Bangkok MP with the Pheu Thai party, on the subject of Prayut’s qualifications prompted several coalition-leader Phalang Pracharat MPs to protest that Wan’s statement was irrelevant to the policy debate.

Wan argued that the debate was relevant because Prayut should not enforce government policies as premier because he had not been qualified to become the Phalang Pracharat’s candidate for prime minister in the first place because he fell into the category of “other state authorities”.

Wan noted that the constitution prohibited state and other state authorities from becoming a prime ministerial candidate in general elections.

Wan also cited a ruling by the Supreme Court which convicted a group of coup protesters for violating state employee orders. Wan also told the meeting that a group of 110 opposition MPs has filed a complaint with the Constitutional Court, asking it to disqualify Prayut as the prime minister and Prayut should therefore not be in Parliament delivering the government policy statement.

Wan was occasionally interrupted by protesting Phalang Pracharat MPs, leading Parliament President Chuan Leekpai, who was chairing the meeting, to remind Wan to adhere to government policies, instead of attacking the prime minister. Chuan also told Wan not to mention the case which is ongoing in the Constitutional Court.

After Wan ended his speech, Wissanu, who supervises legal affairs, rose to explain that the government submitted a written defence to the Constitutional Court on Thursday, insisting that Prayut is not unqualified as alleged by the 110 MPs.

Wissanu noted that the Supreme Court’s ruling that convicted protesters for violating the order of the chief of the National Council for Peace and Order did not state that Prayut was a “state authority” as alleged by Wan. Instead, the ruling stated that the protesters were guilty of violating an order of a “state employee”.

After Wissanu finished his speech, Prayut rose to explain that he respected the judicial system and accepted that the complaint against him has entered the judicial process. Prayut said he would accept any ruling on his qualifications by the Constitutional Court.