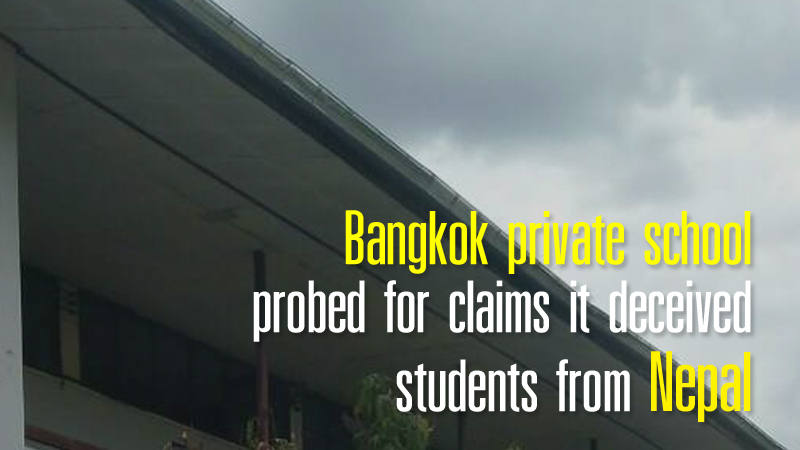 An investigation has been launched by the Office of the Private Education Commission into a private school in Bangkok following media reports in Nepal that the school had allegedly deceived 15 Nepalese citizens to enrol in courses that were not delivered.

Chalum Atthatham, secretary general of OPEC, said they had learned of Nepalese media reports of the school allegedly failing to provide promised courses.

The reports alleged that the students were detained in a building before eventually being sent home without receiving promised classes.

Chalum told a press conference on Thursday that OPEC officials went to check on the privately-run vocational school and found that it does exist. He would not name the school.

Chalum said the school was found in a location other than that on file from its previous registration with OPEC, and that the office had not been informed of the location change.

He said the school licensee has been invited to explain the issue, while the owner has insisted that the school does off genuine courses to students and had accepted the Nepalese students for study.

“OPEC is awaiting the results of an investigation regarding how they came [to Thailand] and whether or not they attended studies and received training,” Chalum said.

“Currently, the school is still in operation. If the school is found to have committed wrongdoing, we will consider whether its licence will be suspended or not. It will depend on the procedure for penalty.”

Chalum said he has reported the issue to Deputy Education Minister Kanokwan Wilawal, who oversees OPEC.

“We will speed up handling the issue because it has affected the ties with Nepal. The OPEC is not ignoring the issue. Once we learned about it, we invited the people involved to testify and formed a fact-finding committee to investigate it immediately,” Chalum said.

He added that the school had violated two counts of the Private Education Act of BE 2550 by changing its location and accepting foreign students without first receiving permission from OPEC.

Meanwhile, Kanokwan said the issue had affected the country’s reputation and so she would call a meeting of agencies concerned to discuss measures for preventing similar incidents.