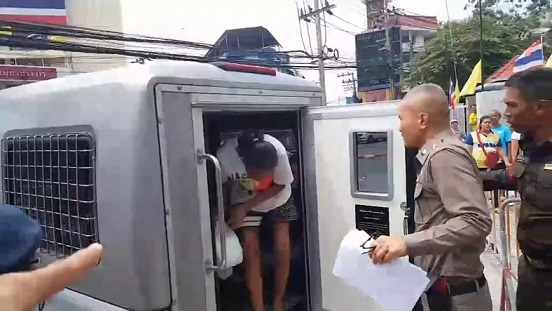 A 34-year-old Thai nanny appeared in court on Friday charged with assaulting a two-year-old boy who is now fighting for his life.

Mayuree Tuangkesorn was taken by police to the Samut Prakan provincial court, where they applied for her first 12-day detention period.

The boy’s mother Piangkhamporn Boonpat, 33, filed a police complaint with the Phra Samut Chedi police on July 22 against Mayuree, under whose care she had place her son 12 days earlier.

Her complaint came after she was informed by Phra Samut Chedi Sawatyanon Hospital that her son was in a serious condition with traces of having been bitten and hit. By then Mayuree had disappeared and the mother was convinced she was responsible for the injuries.

The boy has since fallen into a coma and Piangkhamporn revealed on Friday that his brain injury was so severe he was only being kept alive with the help of a mechanical respirator and cardiac stimulants.

Piangkhamporn said she wanted the nanny to feel the full force of the law and would be pressing for the death sentence if she was convicted.

Police arrested Mayuree on Thursday elsewhere in the province and during interrogation she only admitted biting the toddler, who she claimed had misbehaved and made the bedsheets dirty.

She told officers the boy’s head injury resulted from an accident in which he fell down the stairs.

Police were not convinced by her version of events and charged her with assault causing serious injury.