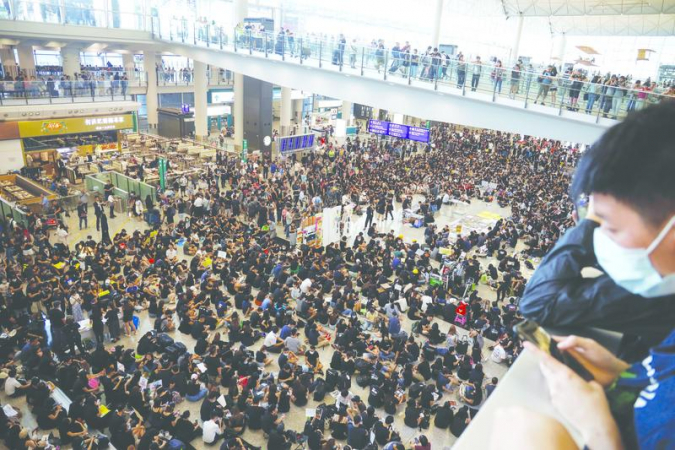 From 1 pm, large crowds of masked protesters, mostly young people clad in their signature black shirts, gathered at an arrival hall and kept chanting slogans demanding a government response to their requests. Some protesters are people working at the airport.

Organizers of the campaign claimed that about 2,500 attended the event. Some demonstrators displayed placards and sent out flyers to arriving passengers. Many information desks and signboards were filled with protesters’ notes and demands.

Some countries have taken notice of the potential risk posed on visitors by the airport protest in Hong Kong.

Singapore advised its nationals to stay away from the Hong Kong airport, and the United Kingdom also warned that the demonstration could affect journeys to and from Hong Kong.

Airport Authority Hong Kong said it has activated the emergency response center and deployed additional staff to cope with the situation. It added that measures were in place at the terminal building to maintain smooth operation of the airport.

A UK tourist who arrived in the afternoon said he has been to Hong Kong many times and was aware of recent demonstrations which had turned into violent clashes with the police.

During the past few weeks, similar protests were staged at subway stations and the high-speed railway station.

Affected by the recent violent protests against the now-suspended extradition bill, at least 11 countries and regions have alerted its citizens of travel risks to Hong Kong. On Wednesday, Ireland became the first country to issue a travel warning for Hong Kong.

In Beijing, the Ministry of Foreign Affairs on Friday blamed the violence in recent protests in Hong Kong for tainting the city’s image and challenging the rule of law.

At a press conference, Foreign Ministry spokeswoman Hua Chun-ying hit out at attempts by the city’s non-government group Civil Human Rights Front to ask more than 60 countries and regions to issue travel alerts against Hong Kong.