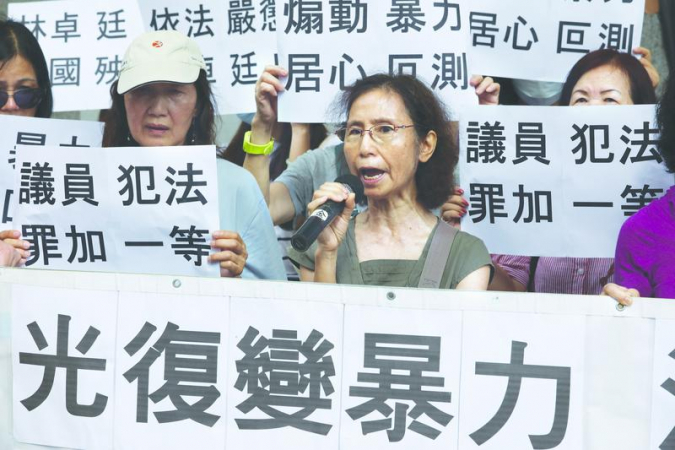 Hong Kong residents gather outside the city’s police headquarters in Wan Chai on Friday to urge law-enforcement personnel to take action against Legislator Lam Cheuk-ting for his alleged role in inciting violence during Sunday’s attack on MTR passengers at the Yuen Long station. (CHINA DAILY)

HONG KONG-Saturday’s planned protest march, amid the highly charged atmosphere in Yuen Long, has educators and civic leaders worried about another outbreak of violence, following Sunday’s vicious attacks on passengers at the town’s metro station.

More than 200 secondary school principals issued a joint statement on Friday that urged students to stay away from the Yuen Long protest.

“We hope all our students will take care of themselves and keep away from demonstrations to avoid getting hurt,” the statement said.

Any protest rally in Yuen Long on Saturday will be illegal because police have issued a letter of objection to the organizers, the statement added. Participants of an illegal assembly face a maximum penalty of a HK$5,000 ($640) fine and five years’ imprisonment.

The organizers have been looking for legal loopholes, and made it clear on social media the march will go ahead with or without police approval.

In the statement, the principals said the situation was “worrisome” and urged all parties to be restrained and rational to avoid violent confrontations.

Presidents of 11 higher-education institutions issued a joint letter to students on Thursday saying they were “shocked and grieved” by the violent incident at the Yuen Long MTR station on Sunday, when masked men in white shirts and wielding canes, golf clubs and iron pipes beat up passengers in train cars and on the railway platform.

The police have arrested 12 people believed to be involved in the violence. Some of them were found to have triad connections.

Calling the situation in Yuen Long “extremely unstable” and “even dangerous”, the letter asked university students to avoid the area on Saturday.

Civic leaders also expressed their concerns. Leung Che-cheung, a legislator from the New Territories West, worried that violent conflicts and chaos will break out in Yuen Long on Saturday.

The Chinese General Chamber of Commerce on Friday also reiterated its objection to acts of violence and called on residents to draw a clear line to distinguish themselves from the radicals.

In a statement, the chamber said Hong Kong has experienced a series of violent acts in which radicalism challenged the nation’s sovereignty and the “one country, two systems” principle.

The chamber expressed hopes that the public could resume rational discussions to restore peace and order and refocus on economic development and improving people’s livelihoods.