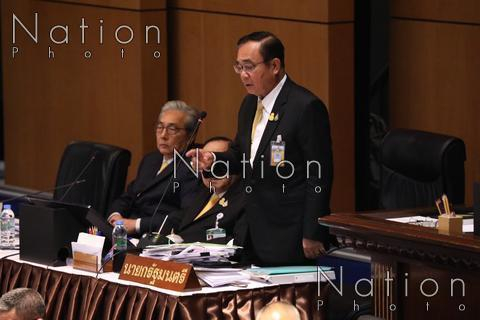 Prime Minister General Prayut Chan-ocha pledged to lead the country on the path of progress, as the parliamentary debate on the government’s policy statement closed early on Saturday. Parliament president Chuan Leekpai closed the meeting at 3.30am, ending 34 hours of debates that began on Thursday.

Prayut said that the two days of deliberations had served as an opportunity for everyone to meet and get acquainted with each other. “Sometimes, we do not like each other because we may not know the other’s thinking but the most important thing is we should respect each other. Sometimes, I may have spoken in ways that were not appropriate, for that I apologise. I will adjust myself for the next meeting.”

He promised to firmly lead the country forward despite the scepticism of many MPs about the policies. “In fact we wrote the policies to manage the country so as to harmonise with the country’s national strategy with a five-year plan.”

Prayut said most members were concerned about the investment plan, which relies on borrowings, especially as the country already has high public debt. He pointed out that in fact the government would be borrowing only one-third of the total investment budget, while the rest would be thrown open to the private sector to invest and develop the country’s infrastructure.

Prayut thanked the Parliament president and members for suggestions on how to manage the country and on how to solve the country’s problems.

He said the government will use all suggestions that help drive the country forward. A meeting will be held with all government agencies in October to find ways to implement the plan, he said.

“We will administer with the rule of law and lead Thailand forward firmly, without leaving anyone behind,” he said.

Future Forward Party leader Thanathorn Juangroongruangkit said the government’s policies were lacking in vision. He also felt that PM Prayut lacked maturity to control his emotions when a member of Parliament debates about his qualification.