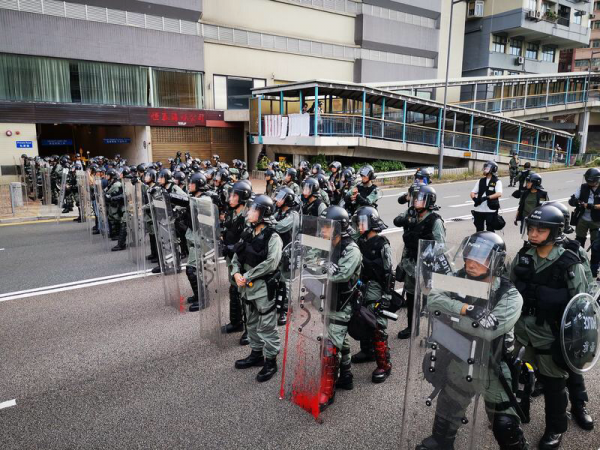 HONG KONG – Police again clashed with anti-extradition protesters – for the second day in a row – firing tear gas to disperse demonstrators in Sheung Wan and outside the central government’s liaison office in Sai Ying Pun on Sunday.

The confrontations erupted after thousands of protesters deviated from a demonstration that had earlier been approved by the police at Chater Garden in Central, and branched out in various directions, heading for Sheung Wan and Causeway Bay.

By around 8 pm, protesters were dispersed from Sai Ying Pun area. Train service for Sai Ying Pun, HKU and Kennedy Town stations was temporarily suspended around the same time.

Police were seen detaining some protesters from the scene.

The marches came a day after violent clashes between police and protesters in Yuen Long on Saturday, in which more than 20 people were injured, two seriously.

They occupied and blocked several major thoroughfares, causing traffic in those areas to be completely paralyzed.

The police had earlier appealed to the participants of the authorized procession on Hong Kong Island to leave the thoroughfares and told them to disperse peacefully.

The public that began at Chater Garden at 3 pm had obtained prior authorization from the police. But, about half an hour later, protesters veered off from the approved route and marched along Queensway and Hennessy Road towards Wan Chai, chanting anti-government and anti-police slogans.

Another group of demonstrators headed towards Sheung Wan, some arriving at the Liaison Office of the Central People’s Government in the Hong Kong Special Administrative Region in Sai Wan, which was attacked and vandalized by radical demonstrators a week ago.

Other protesters headed for Golden Bauhinia Square in Wan Chai that houses an iconic statue symbolizing Hong Kong’s return to the motherland in 1997, and sprayed offensive graffiti on the statue. Other demonstrators congregated outside Sogo Department Store, Causeway Bay, paralyzing traffic along Hennessy Road.

By 5 pm, riot police had set up cordon lines against protesters outside the liaison office, where large water-filled barriers have erected around the office complex.

Police raised the yellow flag at about 5:30 pm warning protesters to stop charging at police lines. The protesters have defied repeated police warnings that they risk being charged with participating in an unauthorized procession and assembly.

After the protesters were dispersed from Sai Ying Pun area around 8 pm, pried bricks and garbage were found on the pavements.

Almost all the shops were closed in Sai Ying Pun area by 8:30pm.

The police had explained earlier on Saturday why they had only approved the assembly at Chater Garden in Central, while the proposed procession afterwards to Sun Yat Sen Memorial Park in Sai Ying Pun and the planned assembly there were not approved due to safety concerns.

Senior Superintendent of Police Public Relations Branch Yu Hoi-kwan said anyone taking part in an unauthorized procession breaks the law, and the police will not tolerate any violence.