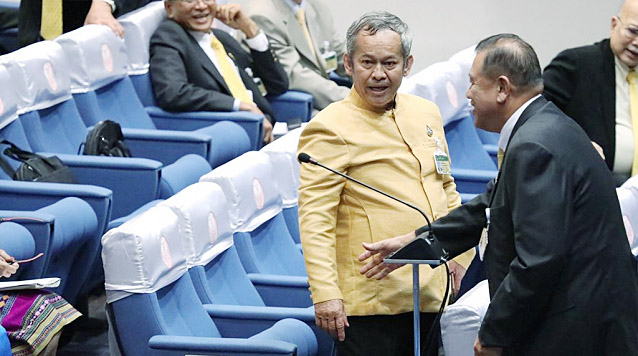 A senator accused of leading a mob action at a temple in Phichit province is facing a major blow following a request made by the temple's abbot to the Senate speaker to revoke the parliamentary immunity enjoyed by the senator.

According to a television report by Inside Thailand aired on Nation TV, Senator Kittisak Rattanawaraha today insisted that he would continue utilising the parliamentary immunity to which he is entitled until he is told by speaker Pornpetch Vichitcholchai to meet with the police.

In an interview with the press, abbot Phra Khru Wisutthiwaraphorn said that little progress had been made by the police since he lodged a complaint a year ago against Kittisak, a Phichit-based senator, as well as against eight others involved in a rally surrounding Wat Bang Khlan in the northern province a few years ago.

The monk added that police had taken no action against the eight others, none of them parliamentarians, and that the police had cited Kittisak’s parliamentary privilege as the reason why they would not further their criminal investigation involving all nine.

The abbot said that Kittisak, whom he said led a large group of protestors to surround his living quarters at the temple, had no legitimate authority to end any dispute occurring at the temple. “It is the National Office of Buddhism and its provincial office that have authority to look into the case,” he added.

Kittisak served as a member of the now-defunct pro-junta National Legislative Assembly. He was involved in a noisy dispute with a Pheu Thai MP during the recent two-day parliamentary session where the new government unveiled its policies.