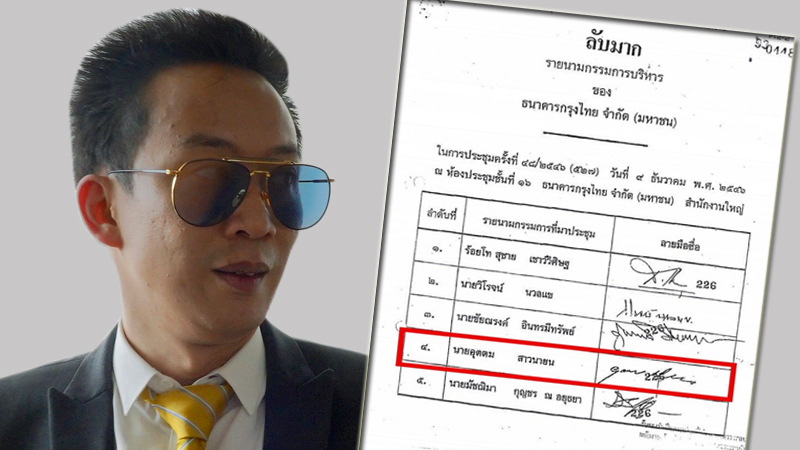 Panthongtae Shinawatra, son of self-exiled former premier Thaksin Shinwatra, has dared Finance Minister Uttama Savanayana via Facebook to swear before the revered Emerald Buddha statue that he has been honest regarding controversial loan approvals.

He posted a photo of a 2003 loan document signed by all five members of the bank’s executive board, including Uttama.

Uttama has insisted he did not approve the loans worth Bt9.9 billion to companies affiliated with property developer Krisda Maha Nakorn Plc.

Panthongtae suggested Uttama did not act in the public’s interest as a member of the state-owned bank’s executive board, “so how is he qualified to be finance minister overseeing a trillion-baht annual budget?”

He dared Uttama to swear before the Emerald Buddha at the Grand Palace that he reaped no personal benefit from approving the loans.

The Bank of Thailand investigated the loan deal in 2005 and a second investigation was launched following the 2006 coup that ousted Thaksin, resulting in convictions against several influential figures.

The court found Suchai and Viroj guilty of malfeasance in office and violations of laws regarding state enterprise employees, commercial banks, securities firms and public companies.

Uttama and Chainarong Indharameesup were alleged to have been involved in illegally approving loans but were not charged with any wrongdoing.

Panthongtae was late last year charged with colluding in money laundering after allegedly receiving a Bt10-million cheque from an executive of Krisda Maha Nakorn that prosecutors suspected was linked to the KTB loan scandal.

The outcome of that case is still pending.