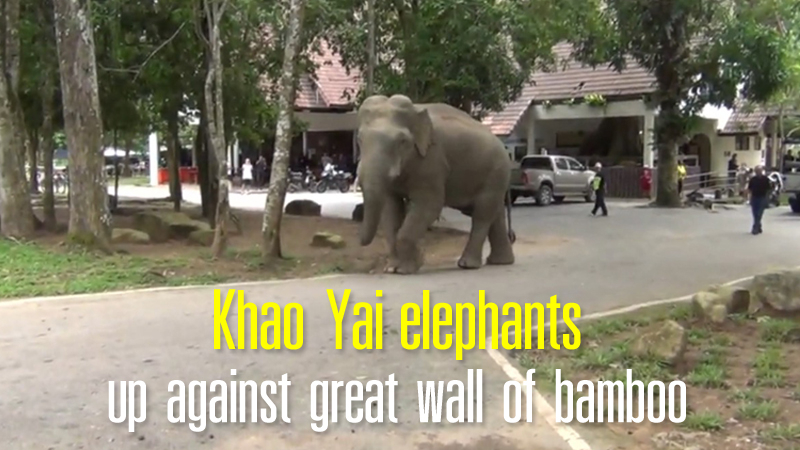 A 400-kilometre wall of naturally barbed bamboo is being planted in Khao Yai National Park to keep wild elephants from roaming out.

Jongklai Worapongsathorn, deputy director general of National Parks, Wildlife and Plant Conservation Department, said on Tuesday the wall would be completed in 2021.

He was speaking to reporters while inspecting progress made thus far on the bamboo planting at the edge of Ban Klong Pel, a village in Tambon Moo Si in Nakhon Ratchasima’s Pak Chong district.

Elephants occasionally wander out of the forest to feed on the villagers’ crops.

Previous efforts to stop the beasts from leaving the park have included giving them ample water and food within the forests, but they clearly prefer fresh farm produce.

Rather than erect an artificial fence that the elephants could probably knock down, Jongklai said, it was decided to plant bamboo as a natural wall. Sixty-three kilometres of the wall has been planted since 2016.

He said motion-detector cameras would also be installed to alert the authorities of elephants trying to get out. That idea has worked well in Prachuap Khiri Khan’s Kui Buri district, where 25 such cameras have reduced elephant raids on farms significantly, Jongklai said.

Khanchit Srinoppawan, chief of Khao Yai Park, said volunteers from local communities were ready to help tend the planted bamboo, which could become brittle during the dry season.