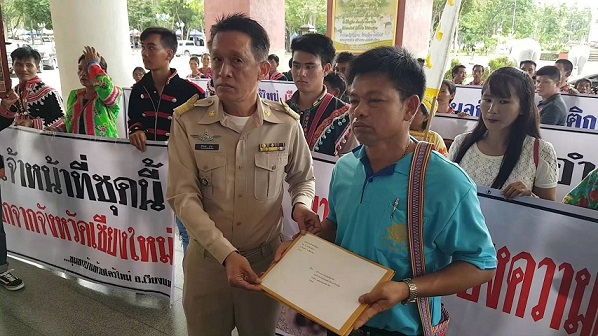 Fifty Lahu hill-tribe villagers of Ban Huay Krai Mai in Chiang Mai’s Wiang Haeng district went to the provincial city hall on Tuesday to seek help from Governor Supachai Iamsuwan over a July 23 incident in which police killed a villager.

As the villagers rallied outside the hall to demand the transfer within 24 hours of six policemen involved in the killing of Jajua Ja-or, the deceased man’s wife Najosae Koju was also present, carrying her late husband’s portrait. 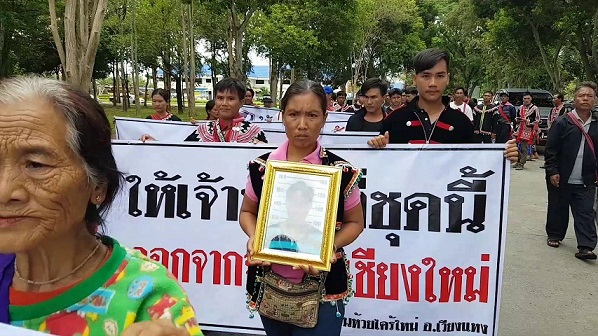 Najosae said her family has lost its breadwinner, so she has been left to take care of their six children alone. “I still cannot recover from what happened,” she said.

Village headman Phromma Maidee said the residents now lived in fear and distrust of officials as they were afraid another killing could happen. They said Jajua would not be cremated yet, pending justice from the state.

The demonstrators submitted their petition to Supachai via Siripong Nampa, the chief of Chiang Mai’s Disaster-Prevention and Mitigation Agency.

The group then moved to the Provincial Police Region 5 Office to submit another petition calling for the transfer of the six policemen involved in the killing. They gave the office seven days to carry out the transfer or they would escalate their protest by filing a complaint with the Justice Ministry and the prime minister. A police source said the six officers have already been placed on vacation leave out of Wiang Haeng for a week.

Police had claimed that Jajua, whom they said was wanted on an arrest warrant issued by a Chiang Mai court on November 6, 2018, had a gun while riding pillion on another villager’s motorcycle when he was stopped by a police team. He opened fire on officers, triggering a gunfight that left him dead. Police claimed that angry villagers had surrounded, attacked and injured Pol Lt-Colonel Triloj Pundee, the deputy commander of Wiang Haeng police station, and Sergeant Chatchawan Wongharn, an Army unit commander in retaliation for the suspect’s killing.

However, the villagers, in their July 25 statement, claimed the man was innocent and had no gun. They called the police’s “overly violent reaction” a violation of human rights and demanded the immediate transfer of the officers involved in the killing to make way for a neutral party to conduct a transparent and fair investigation.

The villagers also held a protest, carrying a coffin outside the Wiang Haeng district office to call for justice.

Meanwhile, Chiang Mai police chief Pol Maj-General Phichet Jiranantasin said investigations were underway into the killing and related offences, including the charge of resisting arrest, the charge of attempted murder – as police claimed the man shot at officers first – and the charge of assault on state officers (after two officers were reportedly injured).

Phichet said the villagers were within their rights to protest but argued that the officers had done nothing wrong. “But the probe result will be based on facts and evidence,” he said, affirming police officers had only done their duty and went by the book.