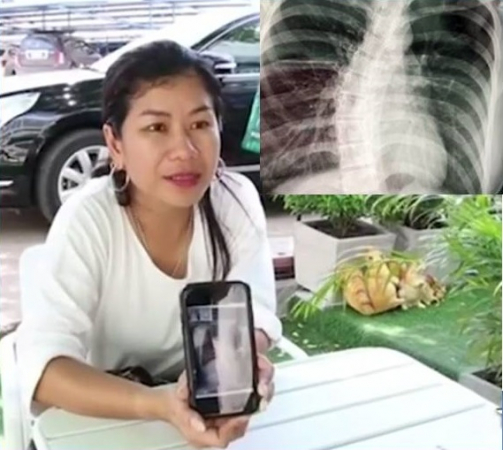 An orthopaedics specialist has cast doubt on a Khon Kaen mother’s complaint about heavy schoolbags causing to her daughter’s scoliosis.

Dr Chatchawarl Sarntipiphat of Khon Kaen University’s Faculty of Medicine suggested on Tuesday the girl could have an underlying condition that was triggered by years of carrying a schoolbag heavy with books.

Toting heavy loads isn’t a direct cause of scoliosis. The cause has not yet been found, although studies have noted a possible link in the maternal heredity line, Chatchwarl said.

He urged parents to check on the spinal posture of their children, especially girls. Scoliosis usually afflicts girls over age 12.

Timely detection from age 10 up would likely see the condition treated by wearing a supportive vest.

Without early treatment, surgery could be necessary and the person afflicted could never again lift heavy weights.

Untreated scoliosis can bend the spine more than 40 degrees, requiring surgery to insert a metal shaft to support the spine.

Dr Chatchawarl agreed that underlying scoliosis could worsen as a result of carrying heavy loads on a regular basis over a long time.

Deputy Education Minister Khunying Kalaya Sophonpanich told reporters at Government House she knew of the Khon Kaen case and had officials looking into it.

She believes students’ book burdens might be alleviated by introducing electronic books that can be read on digital devices.

The schoolgirl’s mother, Suparp Deboonmee Na Chumpae, said the school had given her daughter a trolley schoolbag, but the girl still complained of back pain and tended to slump while seated.

Her daughter has complained since she was in Mathayom 1 of exhaustion and back pain from carrying her heavy bag every day, Suparp said.