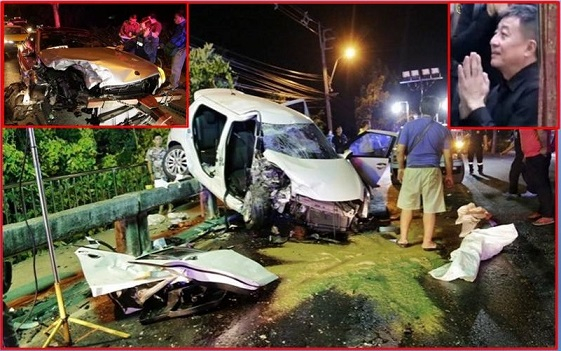 Wealthy Thai businessman Somchai Verojpipat, the Mercedes Benz owner who crashed into the car carrying the Crimes Suppression Division’s deputy police commander in April while drunk, killing the policeman and his wife and seriously injuring the couple’s younger daughter, has been sentenced to three years imprisonment and fined Bt100,000 with the court suspending the jail term.

The Taling Chan Provincial Court's verdict originally sentenced the 56-year-old owner of a mechanical parts manufacturer to six years in jail and a Bt200,000 fine but halved both because he gave useful testimony, was remorseful and had never previously committed a crime.

Concluding that Somchai’s sentence of Bt100,000 fine and a suspended jail term was a fair one, the court ordered him to report to Probation Department officials a total of eight times, perform 48 hours of community service per year and banned from drinking alcohol. The suspended jail term meants that if, over the next two years, he breached any of the probation’s rules, he would go to jail.

Somchai was found to have a blood alcohol level of 260 mg/dL when he crashed head-on into the car of Pol Lt Colonel Jatuporn Ngarmsuwitchakul, 48, in Bangkok in April. The accident killed Jatuporn and his wife Nongnuch,44, and seriously injured the couple’s youngest daughter aged 12.

As Somchai was apparently remorseful over the deaths and paid Bt45 million to Jatuporn’s two daughters aged 16 and 12, reportedly the largest amount in compensation ever offered to a family of road-accident victims in Thailand, the family early in July informed the court of its decision not to pursue civil proceedings against Somchai.