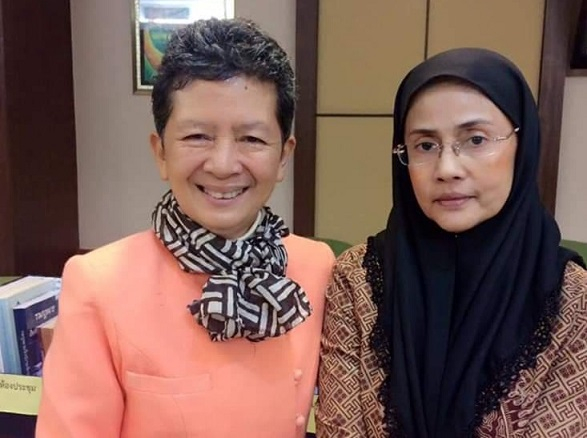 Angkhana Neelaphaijit posts on her Facebook page this photo of herself and Tuanjai Deetes on their first day of working as members of the National Human Rights Commission.

Two former members of the National Human Rights Commission (NHRC), Angkhana Neelaphaijit and Tuanjai Deetes, on Wednesday explained that they had resigned from the NHRC this week over concerns that a change in procedures would restrict the ways they could help vulnerable people.

The comments of the two women, who have left before their terms are due to end, came as NHRC chairman What Tingsamitr dismissed online news reports that they had cited in their resignations the view that the agency's administration had become “too centralized in one person".

With the resignations of Angkhana and Tuanjai taking effect on Wednesday morning, Angkhana said that she resigned from her NHRC position because the internal administration system had impacted on her ability to work for the benefit of people.

In a Facebook post this week, Angkhana said the decision to leave the agency was personal and she viewed that the working atmosphere was not conducive to constructive work and may not lead to the systematic protection of human rights, prevent human rights violations or enable any effective follow-up over violations.

Tuanjai gave similar reasons to Angkhana's and said she had done all she could within her power of as an NHRC commissioner to help people.