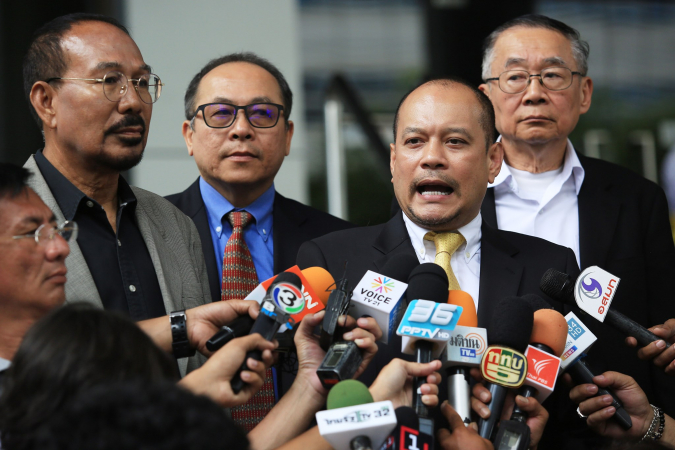 The Supreme Court has postponed the reading of its verdict in the case against five protest leaders over the siege of late Privy Council president Prem Tinsulanonda's residence in 2007, due to a defendant’s illness.

The court on Wednesday put off the verdict reading to September 23 after one of the defendants, Veerakan Musigapong, asked for a postponement due to his illness.

In his written request, Veerakan said he had been treated at a hospital since Tuesday (July 30) for vertigo, losing his balance and having difficulties urinating. His lawyer submitted the document to the court, along with his doctor's health certificate.

The defendants were charged with illegal assembly, causing unrest, carrying weapons and resisting the orders of on-duty officials.

On July 22, 2007, the defendants laid siege to Prem's residence, accusing him of being behind the military coup in September 2006.

All the defendants except Veerakan showed up at the court on Wednesday. About 40 red-shirt supporters were present to offer them moral support.

Nattawut and Weng told reporters that they were not worried about the case and they would accept the court's verdict, whether it ruled them guilty or not.

However, Nopparut said he was concerned about the case, maintaining that he had been wrongly charged with assaulting on-duty officers. He swore that he had not harmed physically any police officer in the incident.

"I stick to fighting in a non-violent way. I have never hurt anyone," he said.

In September 2015, a lower court sentenced Nopparut to two years and eight months in jail, and the four others got four years and four months each.

They all appealed. Nopparut denied involvement in the alleged physical assault of the police officers. The four others argued that they had acted in self-defence.