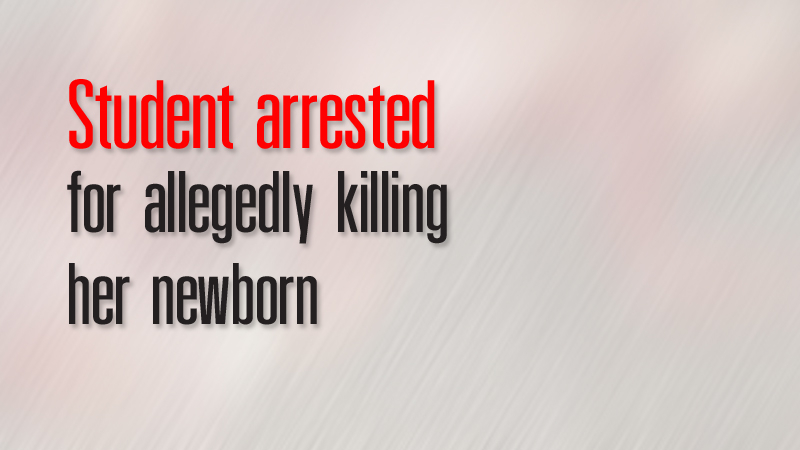 An 18-year-old university student has been arrested for allegedly killing her newborn daughter by feeding her bathroom cleaner than throwing the baby from her room on the third floor of a condominium in Nonthaburi’s Pakkret district.

The student, whose name was withheld, was arrested at 11:30pm Wednesday night after police obtained an arrest warrant from the Nonthaburi provincial court. The baby died shortly after the parents were arrested, police said.

Her boyfriend, 23, also a student, was also arrested and charged with being an accomplice.

On July 23, a newborn baby was found in a garbage bag at the waste disposal area near the condo on Soi Chaeng Wattana-Pakkret 26. The baby was still alive but in serious condition. She died from internal organs failure caused by ingested chemicals late Wednesday night.

Before the arrest, police checked footage of security cameras and saw a black garbage black falling from the condo. Since the baby was still alive when found, police narrowed the search to rooms from the fourth floor down.

When officers entered a room on the third floor above the garbage bins, they found blood stained napkins and noticed that the bathroom had just been cleaned.

The student was taken to the Krom Chonlaprathan Hospital where doctors found a two-centimetre vaginal teatr and accumulated blood inside the uterus. She was told she required treatment by a gynaecologist but refused to be admitted.

Police then took her DNA sample for testing at the Police Hospital and the results passed to investigators on Tuesday showed a match to the baby.

After being confronted with the DNA test result, the student told police that she and her boyfriend had been renting the room for five months. She claimed she did not realise she was pregnant and after giving birth In the bathroom, did not know what to do.

She said she forced bathroom cleaner into the baby’s mouth, wrapped the girl infant in a towel and put her in baby in a garbage bag and threw the bag into the bins below.