By Nakarin Srilert
The Nation

The government has set an expenditure of Bt3.2 trillion for fiscal 2020 with a deficit of Bt469 billion, compared to Bt450 billion estimated by the previous administration.

The Bank of Thailand, working with three economic agencies - the Ministry of Finance, Office of the National Economic and Social Development Council (NESDC) and the Budget Bureau jointly finalised the government’s 2020 budget at approximately Bt3.2 trillion, with an estimated decrease of Bt19 billion in public revenue and a rise in deficit to Bt469 billion.

Dechapiwat Na Songkhla, director of the Budget Bureau said after today's meeting, chaired by Prime Minister Prayut Chan-o-cha, that government spending for fiscal year 2020 was set at Bt3.2 trillion with Bt2.731 trillion in revenue, down Bt19 billion from an earlier estimate of Bt2.75 trillion, due mainly to the exemption of licence fees granted to the private sector by the National Broadcasting and Telecommunication Commission (NBTC).

“The 2020 budget will be presented to the Cabinet for approval on August 6, before the first agenda of 2020 Budget Act will be drafted and presented to the Parliament on October 17, he said, adding that the second and third agendas should be completed in January 2020.

The Senate will then give its approval towards the end of January, officially finalising the Budget Act, followed by the start of disbursement in February”.

The 2020 budget, Dechapiwat said, is Bt200 billion or 6 per cent higher than that of 2019, while government’s revenue is lower than earlier projection due to decrease in the revenue of NBTC, resulting in a deficit of Bt19 billion.

“However, whether or not the rise in deficit for 2020 will affect the government’s goal of a balanced budget by 2030 will depend on future economic growth,” he added.

Key components of the budget include Bt2.39 trillion or 74.7 per cent of the total budget in current spending, such as state officials' salaries; Bt650 billion in capital spending (20.5 per cent) and Bt89 billion in debt payments (2.8 per cent) and another Bt62.7 billion to maintain fiscal reserves . 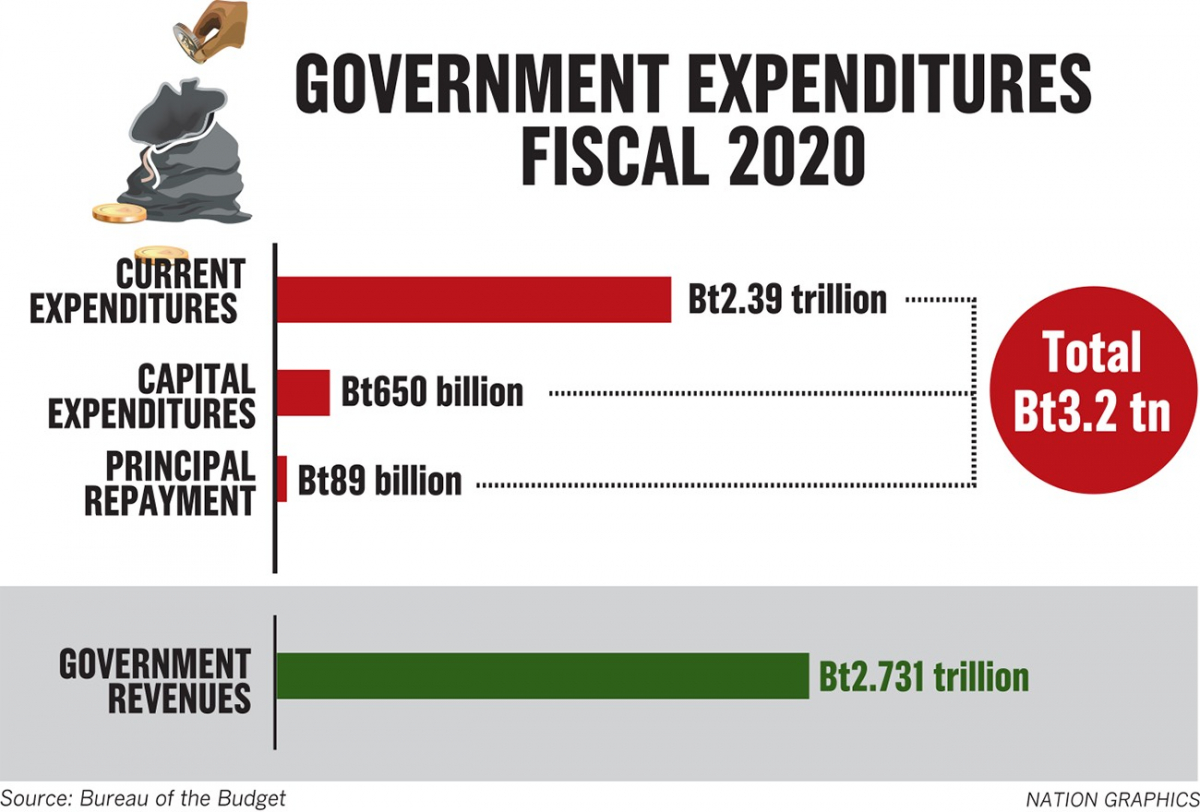 Dechapiwat also added the 2020 budget was based on NESDC’s data that pointed to a 6 per cent GDP growth after inflation.

However this number may need to be adjusted after NESDC’s official announcement of the actual GDP figure on August 19.